I think there would be enough postings in the cyber world of the violence supposedly created by both sides of the antagonists in yesterday's Bersih 3.0 rally in Kuala Lumpur.
I just want to link videos of the other side of what they call Pigs, Dogs and Bitches, pardon my English.

and don't forget the kenduri.

Ready For The Kenduri

To those who want to attend tomorrow's kenduri at PULAPOL Kuala Lumpur, rest assured that the holding area surrounded by barbed wire with the tents and mobile toilets are ready for your arrival. The tourist buses to transport you are also on standby. Hope not to see you there tomorrow. 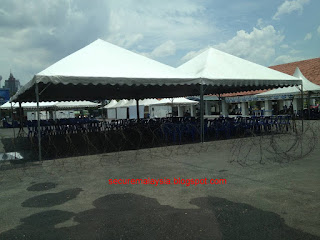 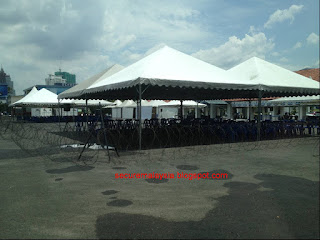 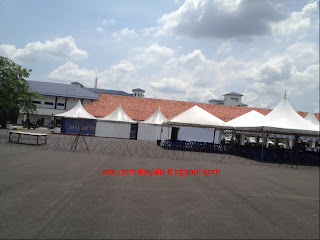 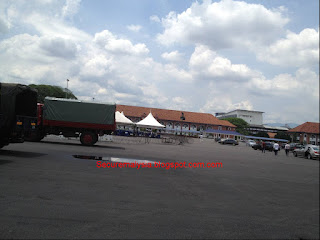 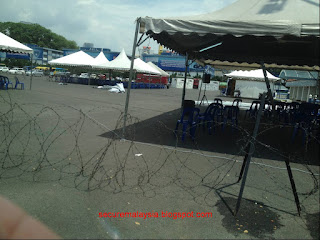 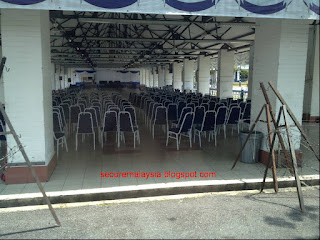 Onwards to a better Navy!

There was a recent flurry of exchanges on the internet on the news that Malaysia has expressed interest to obtain Ex-US Navy Oliver Hazard Perry class Frigates and Whidbey Islan class Landing Ship Docks, as recently reported by Jane's.

Personally I would not like to see the purchase of the Perry class frigates as they are now no more than over-glorified gunboats without missile capability, and even to refurbish them would cost tens of millions of dollars as experienced by the Pakistani Navy with their Alamgir class unit.  Such money would be put to better use to arm our own Kedah-class patrol vessels that are definitely newer and more modern anyway. Even if we would be so interested to obtain that particular frigate class, I would rather see it directed to efforts to acquire Royal Australian Navy's Adelaide class ships that has been modernised and upraded as compared to the USN units that is also scheduled to be decommissioned at the same time.

However interest in the LSD would be a different kettle of fish altogether as the Whidbey's should be hot transfers once decommissioned in 2013. This would quickly provide us the amphibious capacity seriously required since our sole LST Ex-Inderapura was destroyed in a fire leaving only two small logistics vessels to take on the job. Nonetheless a certain local dockyard may kick-up a storm as they have been working together with a Korean shipyard to design and  build the Navy's MPSS units while awaiting the official go-ahead. However this would not matter much if the LSDs are meant to complement rather than replace this project or in other words as a bridging project until our own SGPV/LCS and MPSS units are commissioned.

In conclusion however as per the title of this post, please do not get overexcited as this is just an expression of interest, so there is no certainty that we would be able to purchase the ships as there may be other countries that are competing to obtain the units as well. This is also subject to the possibility that we can even get Congressional approval to purchase in the first place. So let's just wait and see eh!
Posted by mumuchi at 11:50 AM 2 comments:

My dear Minister of Defence.
If you do not engage with the defence bloggers who blog about military affairs without any political baggage, how do you expect to win the cyberspace war. With the facts that are transparent, we defence bloggers can easily defeat the wrongly informed allegations made by these mischievous bloggers that you are referring to. We attend defence shows and talk to the stakeholders in the military defence world, and we believe that we will blog in an informed way. But sometimes we wish that you appreciate us more by giving us access to write more material that would surely be more positive than those uninformed allegations. For one we already know even if Malaysia buys the Anoa it will be for the UN mission as the AV-8 will not be ready in time for this short term requirement. And we can easily counter the allegations that these people make. But if you do not want to be forthcoming and embrace the GTP concept for your ministry, especially since your ministry's PR machinery is not working that well, then how can we blog in a way that would be more positive for Malaysia's defence needs. Think about it eh!

And my Dear Minister, I personally think that Malaysians who visited the DSA knows more about your ministry's plan for the ANOA than the Indonesian bloggers that you refer to. It is just that we hold ourselves to a higher reporting standard than what you may think so we do not glamorise such matters without more solid information.

In case you are wondering what I am talking about, it is in the contents of this article.

KUALA LUMPUR: Defence Minister Datuk Seri Dr Ahmad Zahid Hamidi has told pro-Opposition bloggers not to confuse the people with the issue of acquisition of 6x6 armoured cars with the locally-made AV8.

He said the Government was studying the suitability of the 6x6 armoured car for use by the army under UN Interim Force In Lebanon (Unifil), while the RM8bil AV8 project was a plan for a made-in-Malaysia armoured car.

“They should understand that AV8 is an armoured personnel carrier (APC) with 12 variants for use in Malaysia, while the 6x6 APC is for Unifil,” he said after witnessing the signing of a memorandum of understanding bet-ween the National Service Training Department and Universiti Pendidikan Sultan Idris here yesterday.

Dr Ahmad Zahid was asked to comment on claims in Opposition blogs quoting Indonesian sources as saying that the Government had selected 32 Anoa armoured cars manufactured by PT Pindad of Indonesia because it was cheaper than the AV8.

He said the Government evaluated several 6x6 armoured cars from abroad, including the Anoa from Indonesia, but had not made a decision.

Dr Ahmad Zahid clarified that the need for a 6x6 armoured car for Malaysian soldiers in Lebanon was pressing because the existing Condor, which has been in use since the 1980s, was no longer suitable.

He said the development of the AV8 might take up to even 15 years.

“The prototype is expected to be completed next year but for Unifil, the Condor is not suitable as it is 4x4. We need a 6x6.”

On another matter, Dr Ahmad Zahid said water-based activities at national service training camps nationwide would resume in the near future.

By the way, I just don't buy Deftech's reasons for not showing the AV8's mock-up that you promised and replacing it with these simple displays that are so sterile. 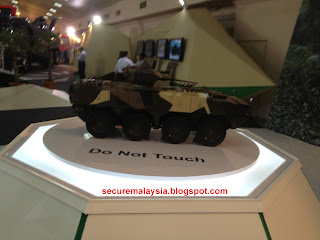 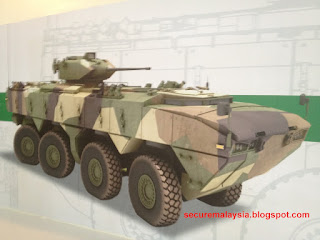 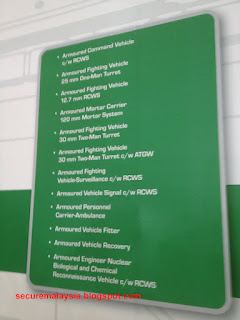 It really does not make sense to have such a big pavillion to house a model on a moving pedestal that actually shouts "FALL BACK PLAN". So either make sure your supplier keeps your promise, or do not make such a promise in the first place.

Posted by mumuchi at 5:39 PM No comments:

I was a little disappointed that I could not find NGV Tech booth during the DSA 2012 and looking at the show directory, they do not seem to be present anyway. I wanted to ask on the development of the RMN's training ship but lucky enough at the Korean DSME booth, there was a small model display and the DSME chap was able to attend to me. He informed that the project is on schedule and also answered that the ship will not have any hangar, as what someone mentioned to me before. In addition, we were advised that DSME was not allowed to display a model of their proposed MRSS, which to me indicated that the project is still much alive and maybe pending a greenlight before it can be made public.


Looking at the photographs of the model below, it does remind you of the Kedah class OPVs yes. 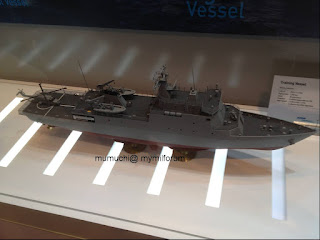 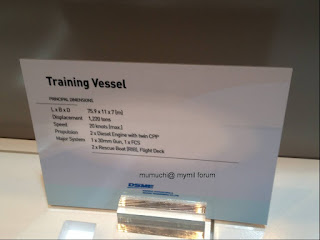 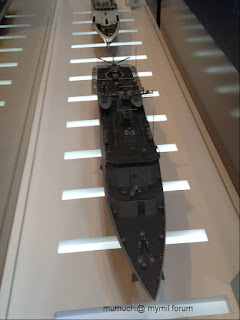 Making a low key appearance at the DSA 2012 is this model of the Royal Malaysian Navy's Gowind LCS model hidden in the open at Boustead's pavillion, so much so if you are not looking for it you may miss it. We were made to understand by the attending staff that this is the basic hull design currently approved while awaiting for the agreement to be made for the systems to be installed. As such it can be considered as model 1.0 as the hull may be further refined based on the final systems installation. Nonetheless we understand that the project is on track for first steel to be cut in early 2013. 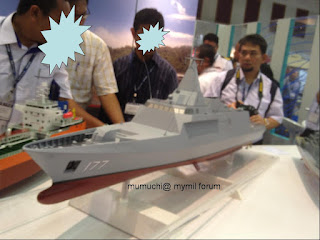 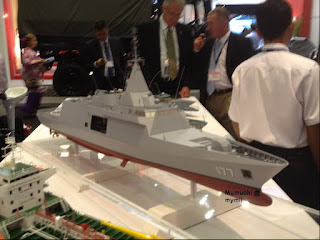 Port and Starboard View of the Model 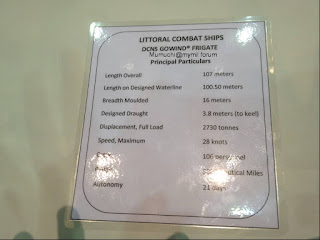 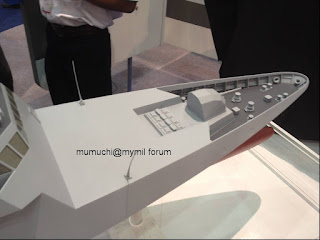 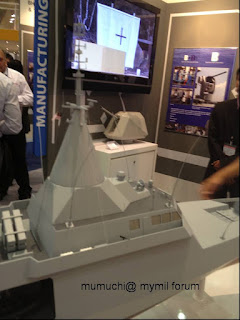 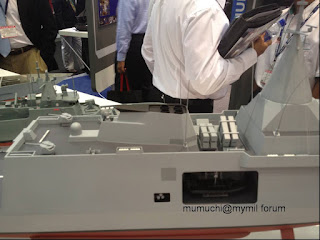 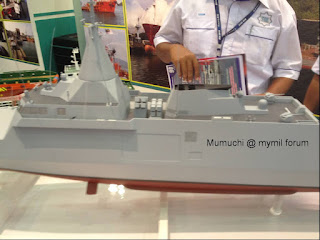 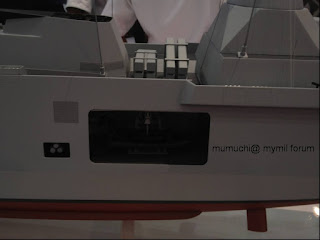 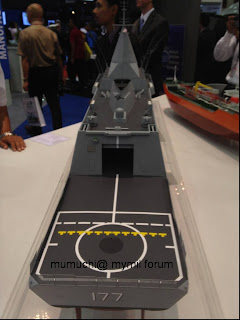 Stern with Helipad and Hangar.
Posted by mumuchi at 2:40 PM No comments:

Want To Know Who We May Face

The recent events that unfolded between China and the Philippines over a shoal in the Spratlys gives a face to the potential adversary we may face. These are the photos of the ships that has been identified by the Philippines Navy.

Source : A view of Chinese surveillance ships in a standoff with a Philippine warship on the Scarborough Shoal after eight Chinese fishing boats were caught poaching in the disputed territory. The photo was presented by Vice Admiral Alexander Pama, flag officer-in-command, during a press briefing Wednesday April 11, 2012, at the Department of Foreign Affairs. PHILIPPINE NAVY HANDOUT
A more clearer photo of one of the two vessels and their specifications.

It was later reported that a third ship the Yuzheng 303 below that seems to be armed was sent as reinforcement while the Philippines seems to have withdrawn their biggest warship that our opposition likes to compare with as a cheaper purchase alternative. In any case it must be remembered that usually nations do not send warships for such confrontation unless they want it to be escalated, but it makes you think what the Chinese thinks of the Patrol Vessel that seems to be much vaunted by our opposition. Let me let you in on a secret, this is the BRP Gregorio del Pilar (PF-15)) vessel specifications. DO remember it is a second hand ship in the first place.

In the meantime, the Chinese continues to play. Perhaps confident that underneath the sea and beyond the horizon, they have something more hefty to depend on. 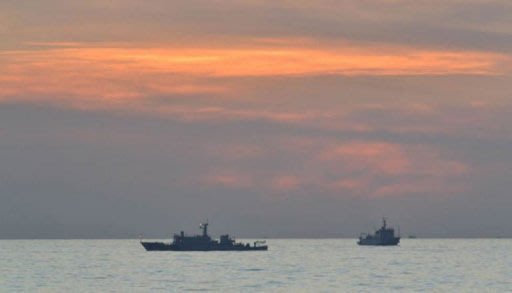 A Philippine navy photo shows Chinese surveillance ships off Scarborough Shoal.
Posted by mumuchi at 10:47 AM No comments:

Why We Have To Be Ready.

Today marks the 30th Anniversary of the Falklands/Malvinas War. This is a prime example of a country getting flat-footed and dragged into a conflict she was not prepared for. Google it up for more details.
And remember, unpreparedness will be paid for by blood. Threats to the nation can come from anywhere and for any reason. Potential conflicts arising from similar island disputes involving Malaysia are a real and present danger. Again google it ups for more details. 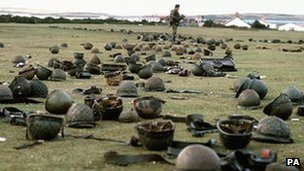 255 British servicemen and three Falklands civilians died during the conflict. The number of Argentine dead is estimated at about 650
Posted by mumuchi at 4:52 PM 2 comments: