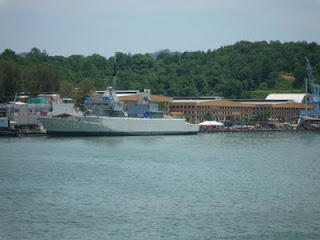 Credit : Huskers of Cari Forum
Further to my earlier post, I am glad that the SLEP for the Kasturi class frigates are finally contracted, especially since KD Kasturi has been stripped in readiness for the SLEP to commence. Hopefully after the modernisation, the Kasturis will finally revert to her true role as a frigate rather than a corvette as some currently classify the class.


KUALA LUMPUR, Aug 12 (Bernama) -- Boustead Holdings Bhd has been awarded a contract worth RM703.823 million from the Defence Ministry to undertake the Service Life Extension Programme of Kasturi Class Corvettes.

The contract, received by its subsidiary Boustead Naval Shipyard Sdn Bhd, is for an implementation period of 53 months, it said in a filing to Bursa Malaysia here today.

Boustead Holdings said the contract will not have a material effect on earnings for the financial year ending December 31, 2009, but will contribute positively to the future earnings of the group.