Just to add to the informed discussion on the SGPV/LCS, I post here the officially announced systems that has been identified, based on the LOA announcements and identified from press releases.

note : OSI INTS purchase has not been officially announced by BHIC but by OSI instead. ===> media release

As you can see, there are still so many systems yet to be decided like the propulsion, missiles and ASW systems. The RM2.825 billion systems purchase can we safely say only amounts to the purchase price of only less than half of the equipment required under the overall RM9 billion contract amount at this stage?
Posted by mumuchi at 11:20 AM No comments:

Transparency Is There, But Do You Check Before You Allege?

Just as a social experiment. I has listed the announced systems purchased for the SGPV/LCS in my military forum but despite linking the site where the official announcements were made, I understand that in some forums some 'wise' forumers has gone ballistic by saying that the amount we are paying is too much for the systems listed based on the program price.

I wonder if they checked out the KLSE Announcements page where the purchase prices for the systems was announced before shooting off that the project is overpriced.

4. to procure, engineer and integrate into the DCNS SETIS Combat Management System, a Combined Integrated Communication System and Communication ESM System ("the Awarded Works") at a total value of RM203,796,392.58 : ==> source

5. to undertake procurement, engineering and integration of additional equipment and facilities for the DCNS SETIS Combat Management System ("the Awarded Works")  at a total value of RM305 million: ===> source

6.  to undertake engineering and integration works in connection with the DCNS SETIS Combat Management System (‘the CMS”),  together with procurement of the CMS and the Rheinmetall Fire Control System (“the Awarded Works”) at a total ceiling contract sum of RM1.532 billion : ==> source

Taking into account the figures given, the systems value of the amount purchase officially announced already touched RM2.825 billion out of the total contract value where many more system prices are yet to be announced.

So how can you say something is overpriced when you still do not know the whole total cost breakdown, I ask you. As usual somebody did not do their homework before shooting off their mouths.
Posted by mumuchi at 5:26 PM 6 comments:

The Need For A Malaysian Amphibious Force

Although this matter has been discussed for a while in my military forum culminating in the recent announcement of the establishment of a marine force as per the following press statement, I have refrained from commenting on it until an article on it has appeared in an established publication, ie, public domain. The article referred to here is Jane's, "Malaysia to establish marine corps, naval base close to James Shoal. "

My comments on this matter is simple. I do not foresee the establishment of a totally independent corps operating with their owned assets. Instead like the statement mentioned with the draw-down of ready amphibious trained units from all services, to me it means its more of a formalisation of the joint amphibious force already training under the Eks-Belangkas and CARAT exercises previously. This force has long been planned as the amphibious arm of the MAF Rapid Deployment Force and as such it is no surprise that according to Jane's article both the 9th Royal Malay Regiment (para) and 8th Royal Ranger Regiment (para) have both conducted amphibious warfare training as a secondary mission. Therefore according to tradition it can be expected that elements from both unit should then be amalgamated to form the core of the amphibious force. 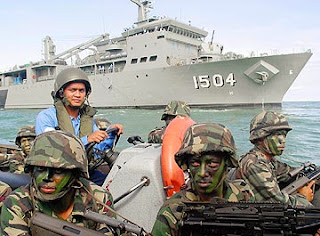 On the same track is that the statement in the press release that the draw-down of the logistical units already in operation in order to reduce time to start of operations and start-up costs should be taken note of. By my simple count the only assets that can be immediately relied on are the two navy MPSS units in service and 17 CB90 combat boats and various RHIBs and landing craft in service, the Army Combat Boat Company with the 28 odd Rover combat boats and army RHIBs and the absorbtion of the Marine Police 10 Watercat M14-class landing craft. However if the acquisition of the Watercats from the Police would not be feasible, it is good that these are actually produced locally by a local shipyard and together with the Rover Combat boats and CB90s, these assets should be able to be procured from other local shipyards also. This simply means that for the shore landing components we can be easily self-reliant, however the availability of the support assets still leaves much to be desired.

However it is also good to note in the Jane's article that an offer to hot transfer an American LPD USS Denver next year is also on the table, probably with landing equipment like AAV-7 amphibious vehicles as to wait for the decision to build the long awaited MRSS locally is likely to take more time under the current economic condition. The offer of the AH-1Z Super Cobra to act as the land and air attack component would complete the requirement in the press statement easily although this would mean the Army Air Wing's requirements would take a back-seat to the equipment requirements of this amphibious force. But with existing threats now mainly focused onto our marine assets and shoreline like in the Spratlys and ESSCOMM, I guess these requirements would now take priority. 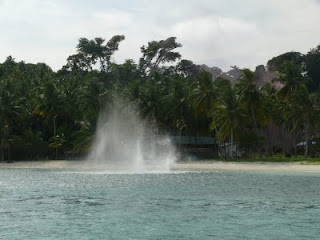 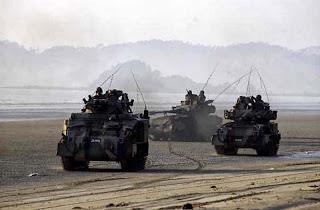 
You may be wondering why I use the nomenclature of amphibious force instead of Marines. The answer is simple. I do not foresee this is a marine force in the traditional sense of being the Navy's expeditionary or naval infantry, but by the reverse token as a land fighting unit able to be logistically transported by sea to safeguard the marine possessions of the nation. They remain essentially an infantry unit but are able to utilise sea based equipment to achieve their objectives. I will not be surprised that in addition to the Para Amphibious element, the other components that will be drawn into the amphibious force will be from the GGK Special Boat Section and the battalions that has operated in the Ops Pasir in Sabah. This would for me avoid the Command and Operational Culture issues that would arise if the amphibious force is put under the command of the Navy, as the Navy would not be able to contribute many numbers to the land fighting elements themselves and will not have much or such experience themselves. So although the current plan would be put for the unit to be an independent force under the control of the Malaysian Joint Force Headquarters, I would not be surprised that later the force is absorbed formally into the Rapid Deployment Force command structure instead.

Well that is the opinion of a pundit such as myself but it would be an interesting exercise to follow this matter to see how it pans out later.
Posted by mumuchi at 11:06 AM 1 comment:

I Say! Overlooked La This Video On The LCS Programme!

An interesting video on the RMN LCS programme that I overlooked before this. Well better late than never right.

From the Facebook Photo pages of Dzirhan Mahadzir, you can obviously compare both versions. To me as I stated in my previous post, the digital camo shown seems to be a cartoonish effort to showcase a digital version what comes may. Up to you on how to accept it.