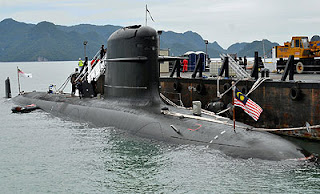 For those wondering why we need the submarines, or for that matter other armaments during PEACE TIME, well here is one for the submarines are good for.

Well if you do not think this is important, ask the fisherman and the sailors who brings the majority of stuff you use in your household what they think?
Posted by mumuchi at 11:30 AM 4 comments:

A Good Day For The Malaysian Military

Today is a good day for the Malaysian Military.

For the Royal Malaysian Navy, the contract for the LCS is signed but only currently appears in the Malay version of Bernama.

Only I wonder why they chose not to sign it during the recent LIMA.

Second the bravery of the RMAF own special forces is recognised as per below :

KUALA LUMPUR, Dec 16 (Bernama) -- A Royal Malaysian Air Force (RMAF) personnel who was involved in Operasi Fajar to free a Malaysian ship from Somali pirates early this year, has been recognised for valour.

He received the award in the sergeant's category.

"The award is given based on evaluation of an individual for integrity, bravery, excellence, friendship and prioritising services," Mohamad Lockman, who is from Kluang, Johor, told reporters.

In the 11.40pm incident on Jan 20, seven Somalian pirates armed with AK-47s and pistols attacked and captured the MT Bunga Laurel in the Gulf of Aden about 333 nautical miles (555km) east of Oman.

Nevertheless, the fast action of RMAF's PASKAU (air commandos) succeeded in rescuing the merchant ship and its 23 crew.

In his speech, Rodzali said the presentation of the awards should act as a catalyst to all RMAF personnel to improve their performance and contribute towards the human capital development of their teams.

Good Job!
Posted by mumuchi at 8:49 PM No comments:

I had read with concern the news report below on the status of the Royal Malaysian Navy LCS programme and till the end of LIMA 2011 there was no concrete information on its status by any party.

However, the contract for building the six ships remains on hold due to disagreements between the builder, Boustead Naval Shipyard Sdn Bhd (BNS), and the end user RMN, according to people familiar with the programme.

One of the key sticking points is BNS and DCNS’s insistence that the ships adopt the SETIS combat management system (CMS) designed by the French company.

RMN instead wants another system developed by Thales, the Tacticos, being integrated into one of its vessels, KD Kasturi.

The navy had hoped to reduce the number of CMS in its fleet to reduce training and support issues. RMN chief Tan Sri Abdul Aziz Jaafar told theSun yesterday that the government had chosen the Gowind design for the LCS programme.

He declined to confirm or deny speculation that the contract would only be signed when the RMN was satisfied that its requirements were met. He, however, confirmed most of the specifications for the ship had been finalised.

BNS managing director Tan Sri Ahmad Ramli Mohd Nor, however, denied the delay was due to disagreement with the end user.

“It is up to the government. We are ready to go forward,” said Ahmad Ramli, a former RMN chief.

Despite the delay, BNS is displaying a model of the Gowind frigate at the Langkawi International Maritime Aerospace exhibition here. The frigate is 107m-long with a displacement of 2,750 tonnes.

It will be armed with a 57mm gun, surface-to-air missiles and torpedoes. With four diesel engines, the ship will have a top speed of 29 knots. theSun had reported on Tuesday that the widely speculated deal for six LCS would be delayed until next year.

A report published in the Janes Defence Weekly stated that the Malaysian government was likely to postpone defence procurement in view of the general election, which could be held early next year.

The LCS contract has been in news since February after Defence Minister Datuk Seri Ahmad Zahid Hamidi announced that the government had awarded BNS a RM6 billion contract to build six LCS or Second Generation Patrols Vessels for the RMN.

The announcement caused an uproar as critics claimed the price of the ships were inflated.

I would rather the story wither rather than the project as the only indicator things are moving along is the display of a supposed model of the LCS based on the French Gowind class below courtesy of forumer marc_zman of mymil. However whether this is the definitive model or otherwise, your guess is as good as mine.

There Is Just No Satisfying Some People

Penang chief minister Lim Guan Eng and his entourage climbing aboard the KD ‘Tun Razak’ for a dive session about 40 nautical miles from the Awana Porto Malai jetty in Langkawi.
It is now a matter of record that the three opposition leaders that heads the current Penang State Government has taken a dive in one of the Royal Malaysian Navy Scorpene Submarine during the recent LIMA.

But Politicians being politicians, it can be expected that the event would still be spinned away as per the Chief Minister's blog posting below.

He can rant all he wants but to this I wanna ask, where does he get off in comparing a submarine purchase with a car purchase ;

After all if one buys a new car, and there is a defect, you take it back to the showroom and ask for a new one. However Zahid refused my suggestion and challenged me to take a dive with the submarine.

Please show of any case in the world where a country with a defective submarine can get a replacement, maybe he is referring to Australia but then he has been mis-informedla as they also cannot get a replacement hahahaha!

At least this time he praises our serviceman including the submariners, but please do not forget your praises of them the next time you want to heap scorn on our military purchases and operationality.

Edited : In case anybody wants proof of the dive itself, the photo sequence is right here at Mymil forum courtesy of forumer Standupper.
Posted by mumuchi at 10:26 AM 2 comments:

Here are some of the first shots of the RMN new training ships expected to be commissioned in 2013. The rest of the pictures can be seem here. Credits to Standupper of mymil forum.

Posted by mumuchi at 7:55 PM No comments:

Well If You Can't Make It

Well well the RMN finally did something different, they made a photo gallery of the first day of LIMA 2011, so if you cannot be there like me, at least these photos can be a consolation.

Again so called experts are asking questions about the Navy's submarine purchase in order to bring it into disrepute.
This is in a dated article from another supposedly naval procurement expert which I initially do not want to comment about; Our Third Submarine Stirs Up Muddy Waters, but if an Old Salt commented with rational reasons in response is something that I should highlight here.

While I am it might as well post here some comebacks by my erstwhile forum colleague Mr. Alphawolf, the owner of Firebase Alpha-Kyron blog, made in Mymil forum :

Agosta jadi sweetener = analogi aku ...kalau kita beli BMW 320i, lepas tu ada faults, instead of repairing FOC, we get an older model of a Beemer to appease us...

Anyone for dead horse meat? But not in the form of a submarine museum piece la.

By the way, this was never our so-called third submarine, only an ex-French Navy submarine re-activated by a third party to be used as a training submarine for Malaysian Submariners that was deactivated again and finally donated to us as a museum piece. And even if it is donated, we still have to sign a transfer of ownershipla, why you think that this means we purchased it. Do your research properlyla, again I remind you.
Posted by mumuchi at 10:25 AM No comments: