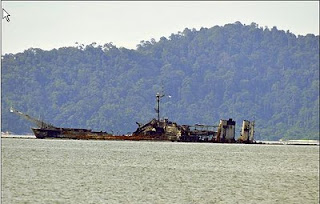 It is sad to find a photo of a dead naval ship, especially when she has had an inglorious end after meriotous service. Decommissioned on 21st January 2010, it can be plainly seen from the photo that any effort to rebuild her would have been a lost cause. At least the incident has accelerated plans to acquire new logistics ship as her replacement. Her next fate remains unconfirmed to my knowledge to this date as the earlier plan for her to be sunk as an artificial reef off Pulau Sembilan had to be scrapped as it was too large and could pose a danger to passing ships. At least she was refloated for the decommissioning ceremony although whether she remains afloat still is unknown.

KD Tuanku Abdul Rahman proved its prowess by successfully test firing its Exocet missile from a depth of 55 metres as parts of its tropicalisation contractual activities. Not bad for a submarine that some quarters claim cannot even dive.

And for proof some video captures from Standupper at mymil. For more photos, sign up and see for yourself at this thread.

It's been awhile since I made any posting but today seems a good day to start again by making a note of our second submarine arrival at her home base in Sepanggar Kota Kinabalu Sabah after transit in Lumut Base, Perak.

Sub ahoy: KD Tun Razak submarine arrive at Sepanggar Naval base in Kota Kinabalu.
I just hope that she will not receive any pot shots by so-called military experts especially on her ability to dive like her sister suffered especially when going through scheduled maintenance before comprehensive sea trials in the tropical waters of the region. I wonder if they thought that the submarine was on the surface the whole voyage when she sailed 7283 nautical miles through the Mediterranean Sea, Red Sea, Gulf of Aden, Arabian Sea, Indian Ocean and the Malacca Straits before reaching home. Maybe because she was on the surface when she made her port of calls at Alexandria (Egypt), Jeddah (Saudi Arabia), Salalah (Oman) and Cochin (India) before arriving in Lumut in the photo below, they thought she did the same throughout the voyage. Well let's just wait and see what these 'experts' have to say in the future.