A Quiet Return, And A Far Quiter End? 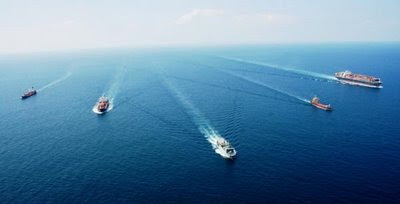 Well I was a bit surprised to read in the new Malay version of KL Security Review that Ops Fajar Operational Vessel KD Sri Indera Sakti had arrived home at Lumut Port without much fanfare on Friday 27 February 2009. After checking all the mainstream newspaper websites, not one seems to have recorded this historical fact, the ending of our first purely naval overseas deployment. Even the Royal Malaysian Navy website sadly did not publish this fact. Even though the second deployment in the Gulf of Aden did not have any showy success with the rescue of our national sailors nor ships other than the mundane, albeit not so newsworthy tasks of convoy escorts, the KD Indera Sakti did manage to get herself involved in the rescue missions of other nations' vessels that deservingly received thanks from those grateful nations. Too bad such gratefulness was not exhibited at home with some even questioning the cost of the whole operations by shortmindedly saying that it should be purely a commercial trade matter rather than a national security matter. Can they not think that if we do not protect our own lines of communications and the ships and sailors that manned these lines, what happens if these ships and sailors refuse to serve and thus causing disruptions to our national and international trade. Look beyond such speculative, vengeful and politically motivated thoughts and look sensibly at the quantitive and qualitative cost and benefits of the operation to the nation. Not to be vain as otherwise why would other nations suddenly jump on the bandwagon of either joining the Combined Task Force 150 in the Gulf or emulating our own independent operations if there is no benefits to their own national interests. As it is, there is no official announcement if this operation will be extended further even after it officially has ended.Let it not be only when another crisis strikes would our naval vessels return to operations in the Gulf, as for want of money or undue criticism of the operation exposes our sailors and ships to the dangers that are clearly present still in the waters of the Gulf. In any case, Bravo Two Zero to the men of KD Inderasakti for job well done! 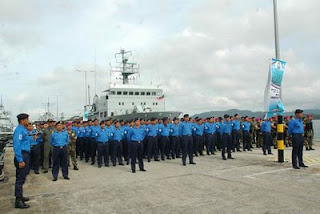 Men of the KD SRI INDERA SAKTI safely returned to their base in Lumut on 27 Februari 2009. They were welcomed home by the RMN senior officers and family members.（Markas Armada TLDM）

expecting the fanfare? they are been there just for delivering the ransom money without touch any of the hijackers even with little pinch. Sad but true as for our navy...

only a yellow bellied coward like you make wild allegations without any facts wjile hiding behind anonimity. I should thrash your comments but it is my policy to publish stupid comments like yours so at least I can engage such stupidity. I have been in contact with people on the scene and knows for a fact that our navy men had acted judiciously and with most examplary courage. Their conduct in the subsequent operations proved their worth. Ask the Chinese and the Indians. If you had any idea what ROE means you would know how a delicate thing the operations was and what a victory it was to achieve success with such limiting circumstances. And no, ROE here does not mean Return On Earnings that you may be more familiar with. Equip yourself better and then talk.

expecting the fanfare? they are been there just for delivering the ransom money without touch any of the hijackers even with little pinch. Sad but true as for our navy..