The NGPV Is FInished, The SGPV Is Started

For a project that has gone through a tumultuous time to complete over a decade, the NGPV saga that had finally ended yesterday with the commissioning of KD Selangor by the Chief Of Navy, did not merit wide coverage in the news including Bernama below. 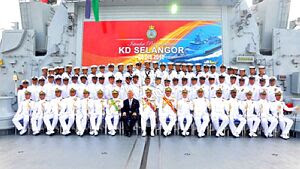 The additional vessels will ease the asset restraint that the Royal Malaysian Navy have had to endure since surrendering 17 of its ships to the Malaysian Maritime Enforcement Agency, he said when launching KD Selangor, the sixth RMN petrol vessel, at the base here.

KD Selangor is the last ship ordered under a programme which started in 1999. The other vessels are KD Kedah and KD Pahang, based in Kota Kinabalu, and KD Perak and KD Terengganu, in Kuantan.

KD Selangor will be based in Lumut alongside KD Kelantan.

She will be based together with KD Kelantan in Lumut while her sisters KD Terengganu and KD Perak are in Kuantan and Kd Kedah and KD Pahang are based in Kota Kinabalu respectively. The CNO commented that despite all what has happened, the Kedah-class construction has been worthwhile as they have provided a high level of readiness and carried out their duties with excellence.

The CNO has also announced that with the LOI issued to Boustead Naval Shipyard, the second generation patrol vessel project(SGPV) should commence in 2012. I do wish though that they are consistent with the name of the project as it seems it can easily alternate between LCS and SGPV depending on the wind, pun intended. Nonetheless there is still no news on whether the Kedah class will be upgraded even though the press releases has emphasized the class' ability to do so under the fitted for but not with concept. Well we may yet need to wait when if ever the upgrading will occur with bated breath for a while longer.
Posted by mumuchi at 9:55 AM

...think there was a hint of upgrade intent with the usual clause "subject to gomen's budget" during the 10th plan..well ,hopes it pulls thru.