Waste Of National Resources Is It?

To those who says that maintaining a standing force of security units is a waste of time as they would only be sitting on their butt, only good for Merdeka Parades and who are they going to war with et cetera et cetera may not realise that these security personnel and the rescue units like Bomba and JPAM are the ones who are risking their necks each year during natural calamities to save the rakyat.

But I bet these people will keep on saying their mantra that the nation do not need armed forces bla bla bla! If you are interested, you can click on this link "

Operasi Murni 2013 - ATM dan Rakyat berpisah tiada" for a true picture of what they are doing now. 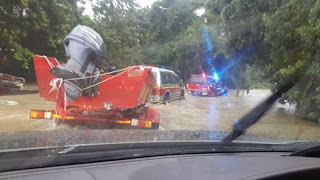 
The Fire Services and JPAM has also sent in their units to help with the operations. For the record, these are the Armed Forces units now engaged in the Ops Murni at this time.

Air Assets being utilised are the new EC725 and elderly Nuris from the RMAF and two helicopters from the MMEA.

I end with this report from The Star with a photo of an Armed Forces' asset which purchase that was heavily criticised before this, operating even though not at Full Operational Status yet.


Army swoops in to flood-hit areas to provide aid

KUALA LUMPUR: The Army has sent in troops to help flood relief efforts in Pahang, Terengganu and Johor.

The relief operation, named Ops Murni, was announced at 4.50pm on Tuesday, and assets and troops were sent to flood-hit zones on Wednesday.

A statement from the Defence Ministry said 190 soldiers from twelve Royal Malay Regiments (Mechanised), one Royal Armoured Corp, as well as 35 Special Forces personnel have been sent to Pahang.


Evacuation efforts are being undertaken in the districts of Kuantan, Maran, Pekan, Rompin dan Jerantut with 16 boats, 16 three-tonne trucks and four Land Rovers.

Six seven-tonne trucks were also ordered there, with two others sent to Terengganu.

The statement also said the Kuantan air base has been assisting the National Security Council to monitor seven flood relief centres since Monday.

"A Nuri helicopter from the Search and Rescue Squadron rescued four flood victims and sent them to the relief centre at SMK Paya Besar," said the statement.