Last month it was announced in the Parliament that the RMN initially wanted to sign a 20 year outsourced submarine rescue contract because the Navy has no expertise but was instructed to re-negotiate for a shorter deal instead.

The Royal Malaysian Navy (TLDM) will use the service of Target Resources Sdn Bhd for "Submarine Escape and Rescue" (SMER) since it has no experience in the field, Dewan Rakyat was told today.
Deputy Defence Minister Datuk Wira Abu Seman Yusop said the SMER service was important as the country's first submarine would start operation in July.
"It will allow the defence ministry and TLDM to learn the technical aspects aimed at providing the best service," he said when winding up the motion of thanks to the Yang di-Pertuan Agong for his opening address.
Abu Seman said on Aug 25, 2008, the defence ministry received approval from the finance ministry to negotiate directly for SMER at a cost of RM8.2 million monthly for 20 years or RM98.4 million annually.

"However, the finance ministry did not agree with the cost and asked the defence ministry to renegotiate for the lowest price over six years. The negotiation is ongoing."

It has to be explained that by extracting from the Parliamentary hansard we learn that "submarine escape and rescue(SMER)" is the first process in a rescue of a downed submarine in order to extend the survivability of the submarine via intervention. This would require a system that encompasses Intervention Remotely Operated Vehicle(IROV), Emergency Life Support Store, Distress Submarine Ventilation and Depressurization System and finally Atmospheric Diving Suit and Hull Inflated Boat. This is the system that is to be outsourced while the rescue teams and rescue ships themselves will be requested from international rescue organisations as the Parliament was informed that ownership cost will be exorbitant especially for a navy that will only have two submarines in service. Even the Indian Navy that already has a substantial submarine fleet and are now building six Scorpene class susbmarines is also dependent on foreign resources if any of its submarines gets into trouble as their Defence Ministry's failure to make a decision on a US$65 million program for two deep submergence rescue vessels has meant that the program has to be restarted again with a retender.

This post will not discuss the hows and why's of the contract but will look at how two regional Navies have also outsourced for a similar service. They have engaged UK's James Fisher Defence (JFD) who recently shipped their latest Deep Search and Rescue (DSAR) 500 series free swimming rescue vehicles(SRV) to South Korea and Singapore. The DSAR 500 had leveraged JFD's experience of the materiel design, in service support and operation of the LR5, the manned component of the UK Submarine Rescue Service (UKSRS), that was in fact substantially rebuilt in service by JFD during the course of its service life until its stand down at the end of November 2008. The vehicle and

other assets of the UKSRS were acquired by JFD from the Ministry of Defence and is now being internationally marketed for further service as the James Fisher Submarine Rescue System (JFSRS). The LR5 vehicle normally carries three submersible crew members, the pilot, a co-pilot and the systems operator. Depth rated to 400 metres, the rescue submersible makes a watertight seal onto the distressed submarine's escape hatch. The watertight seal allows transfer of personnel without submitting them to the high external sea pressure. Technicians and medical officers can be transferred to the distressed submarine if required and survivors from the submarine are transferred onto the submersible. Up to 15 submarine survivors c

an be evacuated at a time to the mother ship or to a mother submarine. The LR5 could make up to eight trips to the distressed submarine (rescuing 120 survivors) before needing to recharge the battery power supply. Meanwhile the Royal Australian Navy have since December 2008 engaged JFSRS to provide it with a standby submarine rescue service using the equipment that includes the LR5 submarine rescue vehicle (SRV), the Scorpio 45 Intervention System remotely operated vehicle and their vastly experienced operations team that is rigorously maintained ready to deploy anywhere across the globe at 12 hours notice; with a proven, lightweight and air transportable submarine rescue system that is ready to respond to any RAN disabled submarine incident.

Evolved from LR5 vehicle, the new DSAR 500 have been designed by JFD to incorporate a number of engineering improvements, technology insertions and additional features. They have also benefited from the introduction of a modular manufacture and outfitting philosophy. The DSAR 500 rescue vehi

cle is capable of rescuing up to 16 submariners or a total rescue payload of 1200kg from a depth of 500 metres in currents of up to 3 knots. Rescuees may be transferred under pressure to the medical and decompression facilities on board the mothership. The DSAR 500 delivered to South Korea is to operate from mother rescue ship (MOSHIP) Chung Hae Jin and builds on JFD existing relationship with the Republic Of Korea Navy, particularly the service’s existing LR5K rescue submersible. The second craft is part of a new submarine rescue service for Singapore. Unlike the South Korean order that is a direct commercial sale, JFD and partner ST Marine are providing a contractor owned, contractor operated submarine rescue service for The Republ 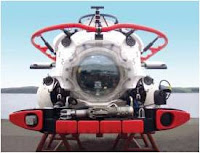 ises a submarine support and rescue vessel (SSRV) (i.e. the mother ship) to transport a submarine rescue vehicle (SRV) and all of its control and handling systems to the site of a submarine in distress.Through FRM, ST Marine and JFD are working together to deliver a fully integrated submarine support and rescue MOSHIP and SRV service, and operate and maintain the rescue asset for a twenty year period. The contract valued at S$400 million is the first private public partnership for the Navy and FRM is due to begin operations by the middle of 2009.

on pound LR7, the next generation of deep submergence rescue vessels, has been designed and developed by Perry Slingsby Systems (PSS), part of the Aberdeen-based Triton Group, and will put the Chinese Navy at the forefront of sub sea search and rescue worldwide. Capable of operating in depths of more than 300 metres, the 10 metre long state-of-the-art submarine can transport up to 18 people rescued from stricken vessels and is set to operate from PLAN's domestically built Type 926 Submarine Rescue Ship. Though it may seem odd to hire a service that is further away than what FRM can offer down south, I guess presumptive security concerns trumps the convenience and accessibility in this case though I hope that I am proven wrong when more details are announced.
Posted by mumuchi at 12:57 PM

An interesting summary of the Malaysian requirements and the intended solution. The obvious answer for all navies to consider is multi-national cooperation - either through government-to-government Memorandum of Understanding (i.e. NSRS - France, Norway and UK) or by contracting arrangements using a competent commercial company. Looking at global capability - on the understanding that regardless of nationality, all will offer assistance in the extremely unlikely event of a sunken submarine (SUBSUNK) - some gaps still remain, particularly around South America, South Africa, Australia and the Indian Ocean. However, interim solutions are in place and there are plans for future systems to cover much of this area.