Making New Out Of Old

According to the Dictionary of Naval Terms by Thomas J Cutler, a service life extension program is a program designed to extend the period of usefulness of service vessels by giving them an extensive overhaul and modernization refit. This is where the life of the hull and basic structure of a ship is extended by replacing the mechanical, electrical, propulsion, waste, and other systems and likely rebuilding the spaces and, of course, re-outfitting them. Nonetheless it has to be remembered that the lifetime of the refitted (SLEP) ship will likely be less than that of a new ship. Although almost all navies does this procedure, unfortunately for a small navy like ours with limited resources, SLEP has been a way to prolong the life of our naval

assets as replacements are usually far in between and may not even be insufficient quantities. For example, our FS1500 Kasturi class frigates has since 1984 had refits under SLEP when their Sewaco combat system wasa updated 1999 and later refits, the 100 mm gun was upgraded to Mk2 configuration in 1994 and around 2002 their MM38 Exocet SSM replaced with the newer MM40 version. As reported by a journalist who attended the recent RMN media event, KD Lekir the second in the class has just finished her SLEP program but there seems to be no identifiable changes to her appearance to suggest a major modernisation refit was undertaken as shown by the photographs here. 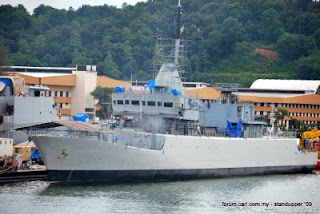 This was despite the announcement during LIMA 2007 that the government had handed over the letter of intent (LOI) to Boustead Naval Shipyard Sdn Bhd for service life extension program of Kasturi Class Corvettes for both KD Kasturi and KD Lekir of RMN. Nonetheless the exclusive photo above taken by Cari Forum Member Standupper on 15 April that was posted in the Security Agencies, Police and Military discussion board shows that the hull of KD Kasturi being completely gutted, probably in anticipation of the full modernisation announced in the LOI. Another source has advised that KD Kasturi entered the dockyard at the end of last year and only recently was prepared for the SLEP program. This modernisation is expected to consist of the following upgrade package as reported by Tempur defence magazine previously :

a. Installation of TACTICOS CMS to replace the Daisy Sewaco-MA Combat Data System

b. Electronics package including Thales DA-08 air search radar , Mirador-IR optronic director,
marine navigation radar , DR3000S ESM suite, ATLAS Electronik DSQS-24C hull mounted sonar, Link Y MK 2.5 and TERMA SKWS decoys.
c. Weapons system upgrade with the intallation of a Eurotorp B515 with A244S Whitehead ASW torpedoes at the ASRL position, the 100 mm gun would be replaced with a medium calibre gun , most probably with the existing Bofors 57 mm gun as the aft gun would be removed completely in order to extend the helicopter deck and two MSI 30 mm guns would replace the existing Emerlec guns.

Well we can only wait and hope that the modernisation upgrade as speculated above be carried out after the ship has finished her SLEP as otherwise her mission capability may not be sufficient to increase her survivability in the this more challenging environment as compared to when she was built in the 1980's. This is especially since we cannot afford to buy many new fighting platforms but instead have to rely on making new out of old ships that we already have.
Posted by mumuchi at 9:57 AM