For the Malaysians in the peninsular at least, Lumut would be THE Navy town where the premier

Royal Malaysian Navy base is located. Thus many would not be aware that Sepanggar Bay at Kota Kinabalu in Sabah would become another premier naval base where the Command Naval Area 2 or COMNAV 2 is located after being transferred from KD Sri Labuan. This is where our submarines will be based and under COMNAV 3 also there are many units that you can read all about at the COMNAV2 website, though currently on 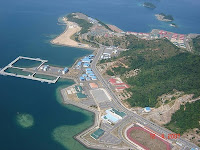 ly available in English, including the Kuching Representative Naval Office (RNO/PWTL) and KD Sri Rejang in Sibu. This post however would concentrate on an isolated area of operations for the RMN, that is the naval stations in the Gugusan Semarang Peninjau that after the declaration of the Economic Exclusive Zone (EEZ) on 20 September 1979, have become outposts to validate Malaysia’s claims to the areas under the EEZ that are at least 156 nautical miles away from Kota Kinabalu. 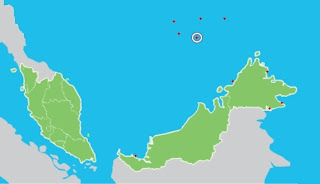 Comprising five stations originally built on outlaying atolls, with the most developed now expanded to a full fledged island that is now a popular diving spot in the region. 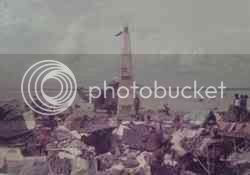 This is in contrast from the origins of Layang-Layang Island when the island started to receive its first human population three years after a claim plaque was erected on the coral atoll. It was at the time on 21 June 1980, when eighteen hardy Paskal men went ashore on May 1983 to build the first encampment while braving the elements. This place is called Wisma Kaki Langit because at the time the only infrastructure available was a helipad for personnel transfer and the soldiers had to camp under the open skies on the bare reef. When the naval station proper was constructed six years later with the construction of a small living-cum-operations quarters, it was also decided that the enlarged island the atoll has become will also be developed as a tourist attraction so that the tourism potential of the island can be exploited.

Thus by 1995, more buildings were added, including two air-conditioned accommodation blocks, an aircraft landing strip, which can be used by Hercules C-130 and CN235 aircraft, two hangars, a radar station, an air traffic control tower, watchtowers and a jetty has made the island a proper island station code named Station Lima for the naval men stationed there to safeguard our nation’s claim to the area.

Patrols by navy soldiers in CB90H attack vessels and larger, faster patrol boats are carried out around the island. Several anti-ship and anti-aircraft guns are placed on several areas on the island and the RMAF personnel operate a Starburst air defence system to prevent low-level air attacks here. 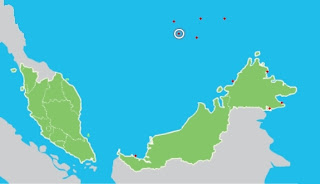 Ubi Reef or Station Uniform was one of the stations which construction was started in the mid-80s for the purpose of monitoring and protection the territorial waters in international boundaries. It was built in early 1986 by Malaysian Shipping Engineering Corporation and in its early stage, was only a module built on top of a barge measuring 60 metres long and 30 metres wide anchored on top of Ubi Reef(Ardasier Reef) that is supposed to be the largest reef in Gugusan Semarang Peninjau. 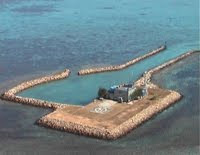 The station was officialy opended on 16 April 1986 and is located 16 nautical miles to the south west of Station Lima and 25 miles south of Station Mike. In 2000 the station was enlarged by filling in around the lagoon basin and a channel was built for safe passage of the visiting navy CB90 Combat Boat to enter and dock at the station. A beacon was also built about one mile to the east of the station to mark guide the boats into the lagoon. A buoy was also placed in the middle of the lagoon to assist in the berthing of the boats. In general, Station Uniform assets has been much enhanced to increase the operational readiness of the station. 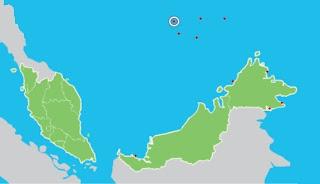 The next reef to be populated was Station Mike or Mantanani Reef when a habitat module built by Malaysian Shipping Engineering Corporation was anchored onto the reef in the middle of September 1986 and was officially opened three months later. 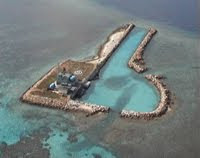 The 44 metre long Station Mike is located about 35 nautical miles to the north of Station Lima and is close to a Vietnamese settlement on Amboyna Cay only 40 nautical miles away. On 18 May 1994, the area around the islet was however declared a restricted area possibly due to its close proximity to competing forces. 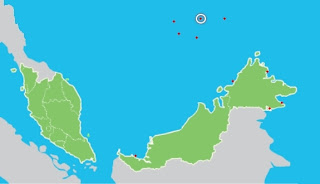 The founding history of Station Sierra or Siput Reef started with the construction on a barge type module at Jerjak Island by PSCND. The module was specially designed originally as a floating vessel to facilitate towing at sea before it is anchored at Siput Reef. The towing was carried out in April 1999 codenamed Ops Sri Petaling whereby the module was towed under the element of disguise to avert notice by neighbouring countries in an operation taking almost one month. The sailing and towing operations was undertaken with several RMN ships in escort until reaching the site and anchored about 16 nautical miles south west of Station Mike. 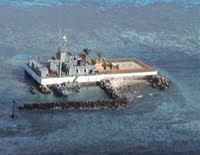 Location selection and module positioning was done during high tide so that it can be more easily anchored during low tide and after found satisfactory, the module was landed and filled in with cement and rocks to strengthen its anchorage. These works were completed in early May 1999 and officially named on 10 May 1999. In its early operations, it was declared that the module was built for marine and scientific research to reduce pressure and misunderstanding by claimant nations. The station was further secured by the extension of Ops Sri Petaling for monitoring and defence in order to safeguard the station from any threats especially from nations objecting to Malaysia’s settlement on the islet. 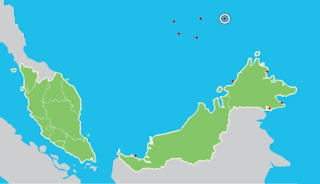 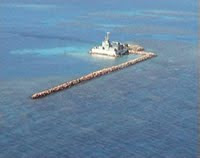 1999 before being anchored in the middle of Peninjau reef and located 70 miles north east of Station Lima. Work on anchoring the module on the largest reef in amongst the station was completed and then officially opened on 10 May 1999. Station Papa was similarly declared as a maritime scientific research station to reduce claimants’ pressure and similarly secured like Station Sierra against any threats from competing claimants.

ituation involving the overlapping claims on the many islands within the Spratlys archipelago. Military personnel are needed to maintain Malaysia’s control of the islets and also to protect the rich marine life surrounding it. The islands are important strategic assets for the country and were believed to contain natural resources such as oil, phosphorous and natural gas. Meanwhile, the reefs are teeming with a beautiful and diverse marine life such as corals and many types of fish, which are great tourist attractions. 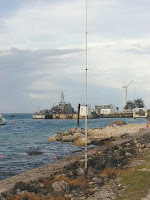 The soldiers are entrusted with the task of ensuring that only fishing vessels with permits are allowed into the area and fishermen cannot catch legally-protected fish. They also make patrols to prevent intrusions by foreign fishing boats or other types of vessels into the territorial waters.

Men stationed at the five islets normally on a three-month rotation monitor the movement of foreign ships and aircraft in the area, including military submarines that constantly ply the South China Sea and every incident of close encounters with foreign ships and aircraft are logged although no incident or confrontation has been officially reported. A trivia about these islets is that has been honoured with a stamp series featuring their ecological systems. Yet these offshore EEZ bases mark our frontiers out in the South China Sea, unprotected from the vagrancies of weather and atrocious sea conditions! Cold and distant these sovereign territorial positions are guarded around the clock by RMN personnel, whilst our citizens are safely tucked in the peace and security of their homes.
Posted by mumuchi at 11:38 AM

wow!! i love this article! MALAYSIA BOLEH! IM MPROUD TO BE MALAYSIAN!

hope that we can secure these 5 territories coz they are very strategics!


maybe one day can send more 1st batch malaysian settlers over there..

Nice and nostalgic. Before the runway extension, the Nuris from No 5 Squadron were the mainstay of Ops Terumbu from the inception of Lima, Mike and Uniform, to the participation in Ops Sri Petaling ie the seizure and establishment of Papa and Sierra. I was part of all that, no regrets, and glad to have done my part with the closest sister service an air officer can have, the Royal Malaysian Navy!!

Jeffrey, I write these postings so people will know of people like you contributions to the nation, since somehow it seems OSA act does not allow the Armed Forces drums to be beaten, but adversaries like Chin Peng's get all the press.

On both accounts, sir, it is the failure of our leaders to know apportionment.

Chin Peng's book was just that: a book. We were victorious over Communism. We can afford magnanimity. Whilst our deeds while not requiring equal fanfare, need to be told so that those who sleep while some of us stay awake know that we are here for them, not just "main masak-masak".

But because of politics, we gave the book so much unwarranted hype and overlook the brave, like your naval Commander who slew many Somali warlords to save innocent civillian lives.

Not even his country but he risked his life in the open streets, single-bloody-handed with a mere scabbard against 5 armed Somali men holding civvies, including a mother and infant hostage.

May your good deeds be blessed for your empathy towards the unsung.

I am no navy man but I think I know who you are talking about. I guess the much maligned and belittled Utusan at least have the gumption to have a regular military column, and I believe I read the Paskal Commander's exploits then.

But still this is still too little and hopefully not too late.

With you around, no, not too late.

And you too sir. Please keep on blogging even after you hang up your wings. We need people to put these things on record.

En.Mumuchi...saya baru terbaca komen pasal paskal komander kat somalia tu..cerita la sikit apa yg terjadi, atau direct me to where I can find the story.Not even a whiff in google or yahoo search...TQ

My bad..I was referring to this, wrong country though..

Salam..sir mumuchi
may i copy your article
and put it to my blog..???
This is something that student like me in UUM should know..i Love to put it to my new blog entry...
TQ sir..

Hi Mumuchi,
I regularly log on to your forum & was very interested in post regarding the formation of station Lima.
Recently I came across another blog by someone who was actually a pioneer in the project.
He was a crew of KD Raja Jarom. According to him they constructed the first platform on Swallow Reef. This was done by Army Engineers (Kor Jutera Tentera Darat). A Nuri helo was used throughout operating from the old LST.
Nice pictures.
Swallow reef was just a small piece of rock that was completely submerged at high tide. I guess the Paskals went in after the platform was completed.
The posting is in Malay.You may already know of this.
http://tsaifuzie.blogspot.com/2013/12/kisah-pulau-terumbu-layang-layang.html

I hand picked the officers for PAPA and SIERRA.

Thank you very much For this article as it stand witness to our deeds. I lost my prime years there but it was the best moment of my life. Some of The real friends I found were in these operations.