Sir Can You Teach Me?

It mystifies how a tale spin spun often enough can become a gospel truth to some people. The most current spin that makes me angry as it confuses even die hard military enthusiasts is the spin that RM8 billion for the AV8 APC by Deftech is highly overpriced with implied hints of corruption bla bla bla!. This is coming from someone who says on one hand that a leading APC would cost RM10 million each, but then goes on to say that the government would only need RM2.57 million to buy 257 APCs, which makes one unit only costing RM10,000 each, cheaper than a national car. Don't believe me, read it here at your favorite Harakah Daily article from which I will only quote the pertinent portion.

I have no idea where these people get their per unit price of an AV8 is at Rm31 million per unit, I can only deduce they just divided the project price of Rm8 billion with 257 units, ie RM31,128,404.70 each. Unfortunately they conveniently forget that the RM8billion price tag includes Development Cost for Deftech to come up with an indigenous APC so much so that if additional units are purchased, then the unit price will be lower as it will be amortised over a larger quantity is also overlooked.

Let's look at Germany's Boxer APC Program as they purchased a similar number of APCs as what Malaysia is proposing to purchase in 2006. 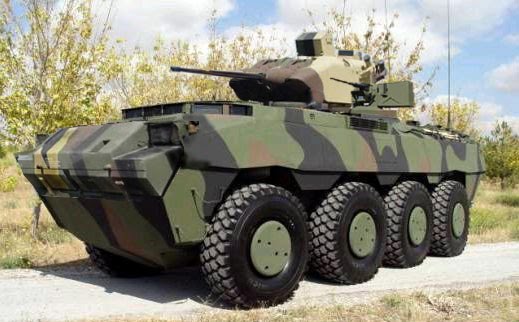 Now let's again just use the market price of a popular APC that using their yardstick would cost only $1.9 million per unit.

But seriously folks, do you really think that Malaysia can amortise the cost over a large order quantity as the Americans did? A more realistic comparison is the German Boxer program which makes our AV8 more competitive in pricing. Anyway those comparison prices are for a monetary value of 5 years or more ago and not current prices, as then it will actually will be more than calculated.

That is why I still maintain we should proceed with the project at $2.5 billion as this is a viable and competitive price for Malaysia to gain an indigenous manufacturing capability which includes development costs, that surely can be amortised over more units in the future as all the older APCs will have to be replaced, and by then the actual unit cost will surely fall further.

By the way, if you are wondering where I got the figures, these are taken from the article below, which gives a $2.5 billion figure in US Dollar that suspiciously discounted to 10 percent seems to be the figure being stated by their spin but in Malaysian ringgit. But hey I did not spin my numbers eh. It is really around RM8 Billion when you change it from US$2.5 billion.

A letter of intent was signed with DefTech, which will develop the 8x8 wheeled APC vehicles and manufacture 12 variants, the Ministry of Defense said. Variants include a personnel carrier, anti-tank weapon carrier, command-and-control and anti-aircraft weapon vehicles.

The army will take delivery of the prototype APC for testing next year.

The Malaysian-developed APC is being built from the PARS APC produced by FMC-Nurol Defense System of Turkey in co-operation with General Purpose Vehicles, which has headquarters in New Haven, Mich.

The Pars APC was unveiled in 2005, equipped in an 8x8 chassis configuration but is also available in 4x4 to 10x10 setups. The APC is aimed at the Turkish Land Forces Command.

The Pars APC is a modular design and can be fitted with various armament fits, including external and turret mounted armament, and can accommodate one- or two-men turrets.

The DefTech announcement was made on the final day of the Defense Service Asia 2010 exhibition at the Putra World Trade Center in Kuala Lumpur.

Datuk Seri Mohd Khamil Jamil, DefTech chairman, said delivery will be over six years with the first vehicles commissioned by the army in January 2012.

DefTech will farm out some of the manufacturing to local suppliers in many of Malaysia's regions. Contracts for the work will be sought as soon as possible.

DefTech is also co-operating with Denel of South Africa to build a two-man turret for the APC while Sapura Thales is expected to become the systems integrator.

There was some surprise over the amount that the government is to pay for the APCs given the large number that it has ordered, a defense analyst told The Malay Mail newspaper. Based on the number of vehicles to be procured and the contract price, each vehicle would cost $10 million, a much higher figure than if the government decided to purchase comparable off-the-shelf 8x8 APCs.

One analyst cited a German-built Boxer Multi-Role Armoured Vehicle cost of round around $625,000 each when the German army bought 200 in 2006. The Boxer's development cost exceeded $3.1 billion.

The base price paid by the U.S. Army for its Stryker 8x8 APCs is around $1.9 million each. However, more than 2,300 Strykers were ordered, the analyst said.

The British FRES program cost nearly $7 billion before it was canceled in 2008. But the project, including procurement and whole-life cost, if given the go-ahead, eventually was to have cost another $12.5 billion.

The U.S. Army didn't spend a huge amount on the development of the Stryker as it was developed from the MOWAG Piranha APC, Mahadzir said.

DefTech, set up in 1996, invested nearly $22 million in a dedicated defense and security manufacturing division in Pekan in Pahang state in 2001. The 25-acre site has a covered work area of 180,000 square feet. It also has a test track with NATO standard obstacles for all armored and soft-skinned vehicles, both wheeled and tracked, of up to 60 tons.

you got me there...but Harakah's not mine..but really is it a literal exchange from USD2.5 billion to RM2.5 billion or is it a coincidence..

Those who believe everything Harakah prints are beyond saving. :p

Keep up the good job on your blog, mate. I learn something new every time I visit your page. Thank you for writing.

Thanks bro! Mind you I am no government counter-spinner! In fact I say they are dumb for not being able to clarify so many simple spins to the general public. Now that really scares me.

Let's get the job done without getting spun is all I ask for.

As I have said all along to all my frens who are PR followers, please convert the RM8b into internationally used denomination, i.e USD, then read some more before saying this project is a waste, corrupted, bla,bla,bla.... but like Snuze said, these people are beyond saving.

Without fear or favour..and definitely no spin! Tks matey! No Tuans here...we kicked them out 53 years ago ;0)