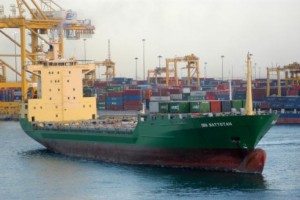 No need to elaborate on the latest hijacking by Somalian pirates of a Malaysian flagged merchant ship the MV Albedo. With all due respect to the crew and vessel owner, we as a nation can breathe a sigh of relief that none of our countrymen was amongst those captured. It will not become a serious national event that puts pressure on the Malaysian Government to actively pursue a peaceful resolution, but rather allow an under the radar resolution to the matter as what happened with the Malaysian Tugboat Masindra 7 affair that was released after eight months in captivity.

The questions for me are these. Was the BM5 back on patrol station when the incident happened? Was the fact that that the ship was hijacked while it was carrying containers and bound for Kenya from Jebel Ali in the United Arab Emirates, reportedly 900 nautical miles away from the Somalian border makes her operations impractical to join the Malaysian convoys transiting the area. The expansion of Somalian piracy theater of operations was a fact that I mentioned in my previous posting, and the question of the need to have another escort vessel in station while the other goes home should now become central. This does not include the quandary whether a single escort vessel is actually sufficient to meet Malaysian vessels escort needs in the expanded threat area.

Such operational realities now needs to be answered, and whether the responsibility should remain only with MISC and the Navy or should also now be shared by all Malaysian shipping operators operating in the threat area. Even if the BM5 is still at home port while the incident transpired, it would be unreasonable to put any blame either on the Navy, MISC or the Malaysian Government. Their best efforts will never be good enough to protect all the Malaysian ships in the area, even more so with such limited resources. Those who complain should sign up and go for the 100 plus days tour themselves, or just shut their mouths up!
Posted by mumuchi at 9:57 PM

IMO, we should join forces with other coastguards that have already forward deployed their air patrol assets in areas such as Djibouti. In this case we might lease one or two aircrafts like the Fokker F-50 (already available through Penerbangan Malaysia Bhd) in order to monitor areas that are out of reach by means of sea patrol.

Plus, in order to expand surveillance horizon of BM5 or any other RMN vessel deployed to the Gulf, I suggest we utilise mini UAV such as the Agas system or Cyber Shark system or the Fulmar ALUDRA system just like the USN that uses Sea Scan UAV system.

These UAV are relatively cheap and produced locally. If direct procurement can be formalise than leasing might be the option. We have done so using the same leasing method for ALUDRA Mk1 TUAV that are currently being deployed at Sabah.

Interesting. I did not know there was an air response to the problem, only naval. I would like to know how the issue of overflights and air sovereignty is tackled, and where the home base would be.

Alas for the UAV issue that would be a more sensible solution I see no immediate user-ability. Has the navy actually tested any like the rotorcraft from Sapura?

Swedish coastguard as well as japanese coastguard have sent their respective MPA's to Djibouti maybe through some arrangement with the local government and maybe some help from the French. This is not clear due to the fact that I'm only referring to foreign reports about such deployment.

As to the UAV, I think that this is the right time that the Navy starts to test new ideas and innovation. This will further help to develop our local defence technologies in terms of industrial capabilities and capacities.