Earning Their Per Diem 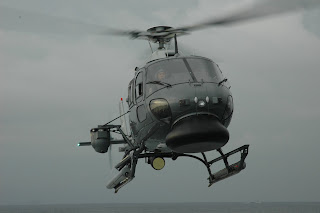 Looks like the crew and special forces men on board KD Inderasakti are earning their combat pay in this phase of Ops Fajar as it has been announced that their Fennec Helicopter has again gone to the assistance of another merchantman in the dangerous waters of the Gulf of Aden. It seems this time our mission has entered a more dangerous phase in their convoy escort duties, as the Somalian pirates are putting more efforts in their hijacking efforts before the full brunt of international navies that are sending their ships for policing duties in the waters takes effect. Thus it seems too bad if the Navy really stop this operations at the end of next month, just as the international community takes stride in dealing with the problem. This decision should be re-considered as we may not want to see our merchantmen requesting other nations' convoys when we stop our own convoys, as it would be easier to request a quid pro quo entry into other nation's convoy when other nations' merchantmen also take advantage of our own convoys as illustrated by these articles on the rescue effort. 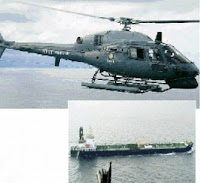 To the rescue: The RMN Fennec helicopter gunship (above) drove off two pirate skiffs pursuing the Indian crude oil tanker Abul Kalam Azad (inset) in the dangerous pirate-infested Gulf of Aden.
“It was a tense morning,” he said. “Sri Inderasakti received the SOS call from the Abul Kalam Azad about 15 nautical miles away at the time,” he added. In rapid response, Kapt Mohamad Adib dispatched the ship-borne Fennec helicopter gunship armed with twin general purpose machine guns and an elite Naval Special Forces (Paskal) airborne sniper.

“The Abul Kalam Azad was also advised to make its way toward our ship for better protection. Sri Inderasakti too had turned and was heading to the scene by then,” Ahmad Kamarulzaman said. The Fennec, piloted by Leftenan Muliadi Mohd Noor reached the scene where the two skiffs were chasing the tanker and shooting at it with assault rifles. A Saudi Arabian navy vessel HMS Al Dammam, believed to be part of the European Union’s Coalition Task Force 150, had also dispatched its own Dauphin helicopter gunship at this point, he added.
Both ships took turns to deter the pirates while giving the oil tanker cover, he said, adding that the skiffs then escaped south-east. The vessel then headed west, escorted by the Al Dammam. The encounter was the second time the Sri Inderasakti helped to foil hijack attempts by pirates in the gulf, the first one being the Chinese crane vessel Zhenhua 4 on Dec 18.
2009/01/02
Malaysian and Saudi navy copters scare off pirates
By : Marc Lourdes and Joseph Sipalan

KUALA LUMPUR: Malaysia once again charged to the rescue of a cargo-laden ship in the pirate-plagued Gulf of Aden.

Yesterday, less than two weeks after rescuing a Chinese vessel from being plundered, the Malaysian navy saved an Indian tanker, MT Abul Kalam Azad, from a similar fate.The 92,000-tonne vessel was sailing in the gulf at 11.37am (Malaysian time) when it was attacked by pirates in two skifs.One of the boats had seven men in it, all armed with machine guns. They unleashed a barrage of fire at the bridge and accommodation area of the ship. They also tried to board it, all the while keeping up the attack.However, the ship began taking evasive measures and increased speed to the maximum. This was also when it issued a distress signal, which was picked up by Malaysian navy support ship KD Sri Indera Sakti about 15 nautical miles away.

Upon receiving the signal, commanding officer Capt Mohamad Adib Abdul Samad despatched a helicopter, reaching the tanker in less than 10 minutes.The helicopter was outfitted with a general purpose machine gun and also a sniper from the Paskal naval commando unit.The Malaysian helicopter was joined by a Dauphine-type helicopter of the Saudi Arabian navy, effectively scaring off the pirates.The captain of the Abul Kalam Azad had initially requested to join the Malaysian International Shipping Corporation convoy, escorted by the Sri Indera Sakti, but later accepted the offer from a Saudi Arabian naval ship to escort it to its destination.

International Maritime Bureau Piracy Reporting Centre head Noel Choong said the crew of the Abul Kalam Azad reported seeing the pirates in military-style garb.However, asked if this could mean that the Somali military was involved in piracy, he was non-committal."It is hard to say because this is the first time we are hearing such a report." Choong said the increase in naval activity in the Gulf of Aden was making piracy increasingly difficult and this was causing pirates to become more desperate to get their hands on any ships they could."We wish to remind all ships to keep strict visual and radar watch because it is the only way they can escape." Asked if the gloomy global economic forecast for this year would result in an increase in piracy, he said it would not make much difference in African waters."Somalia, for example, is already poor and in bad shape. There is no deterrent to pirates there and, as long as there is no deterrent, attacks will increase anyway."However, in the Straits of Malacca, there are many poor people who will be affected badly. We don't know if it will be as bad as in 1997 (when piracy was rampant in the Straits of Malacca), but we can see that Indonesia is already stepping up patrols now." Choong urged the authorities to beef up patrols, especially in the Straits of Malacca, the South China Sea and in Bangladeshi and Indonesian waters.

KUALA LUMPUR (Jan 1, 2009) : A Malaysian military helicopter, taking off from a warship sailing nearby, scared away Somali pirates trying to hijack an Indian vessel in the Gulf of Aden on Thursday, the International Maritime Bureau (IMB) said.

The incident, the first of 2009, involved an Indian ship with a dead weight tonnage of 92,687 tonnes, said Noel Choong, an official from the Kuala Lumpur-based IMB."Two small boats carrying pirates came close to the Indian vessel and started firing on the bridge and the accommodation area," Choong told Reuters.

"The pirates tried to board the vessel repeatedly but failed, as the captain maneuvered the ship and increased its speed." A Malaysian warship, KD Sri Indera Sakti, which was about 15 nautical miles from the area, responded to the Indian vessel's distress calls and sent a helicopter which scared the pirates away, Choong said.

"We have been told that all crew members are safe, while the damage to the vessel is being assessed," said Choong, without saying how many crew were on board.

Last week, quick action by a German warship halted an attack on an Egyptian bulk carrier, while a Chinese commercial vessel was helped by a Malaysian warship earlier in December, he said.

The rescues are a sign that foreign navies patrolling the key shipping lane linking Europe and Asia are adopting more effective tactics against the surge in piracy in waters off Somalia. "Despite the increased naval presence, the pirates are still finding loop holes to attack ships like this, highlighting the need for more effective anti-piracy measures," said Choong. The rise in attacks on shipping prompted NATO ships to begin anti-piracy operations off the Somali coast in October, joined by other nations such as China and India.

In 2008, 111 ships were reported to have been attacked and 42 hijacked, Choong said. Fourteen of the hijacked vessels and more than 240 crew members are still being held by pirates. Nearly 20,000 ships pass through the Gulf of Aden each year on their way to and from the Suez Canal. - Reuters