After the establishment of the Royal Malayan Navy, expansion was gradual since the Royal Navy still shielded the nation through the long years of Emergency, even though independence came in 1957. Only a minelayer and two additional SDMLs 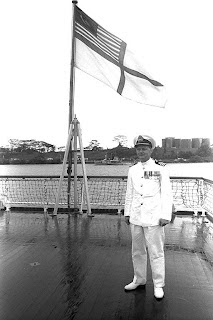 entered service before the RMN was formally transferred to Malaya on 12 July 1958. To strengthened the fledgling navy, the British further turned over four Inshore and one Coastal minesweepers that was also used as patrol craft. With the formation of Malaysia in 1963, the Royal Malayan Navy became known as the Royal Malaysian Navy and shortly faced the challenge of the Indonesian Confrontation, resulting in a period of rapid expansion with the induction of additional Coastal minesweepers and the navy’s first frigate, the KD Hang Tuah . Assuming greater responsibilities of safeguarding the nation’s maritime interest at the end of the Confrontation period, plans were already made much earlier to induct new patrol crafts instead of relying on transfers from other navies. Built in three batches, patrol crafts became the backbone of the 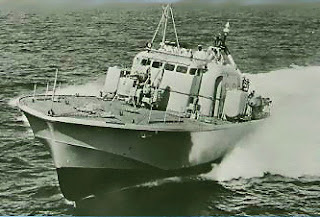 navy for a considerable period. At the same time, the introduction of the Perkasa Class torpedo FACs marked a new dawn of modernisation and eventual entry into the missile age. The sudden decision by the British to quit the Far East in 1968 also heralded an extended period of rapid expansion, with the thrust of providing a modern fleet with sophisticated weapons and missile systems, thus bigger and faster ships were acquired to give the RMN better reach, firepower and performance capabilities. 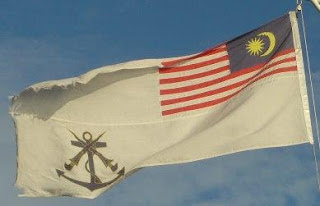 The declaration of the 200 mile EEZ in 1979 that increase the RMN’s area of operations further added to the expansion but there was a lull in capacity building due to economic difficulties before the RMN again announced new rounds of acquisitions in order to prepare for the challenges of the new millennium, this time taking on the capabilities of three dimensional warfare with new stealth frigates, modern patrol vessels, submarines and naval helicopters. Below are the ships that were decommissioned before the new millennium that paved the way for the RMN to reach this level.

HMMS Sri Johore was for a brief time the largest fighting ship in the newly independent Royal Malayan Navy, although she had actually entered RMN service in 1954 with the Malayan Naval Force under the name of HMMS Penyu. Of WW-II vintage, she was used as a large patrol craft in the Malayan service rather than her actual designation as a minelayer, as she was actually built to the design of an Admiralty class armed trawler. In 1958 she was transferred to the Sri Lankan Navy upon deactivation from the Malayan active service and was finally broken up in 1960. These minesweepers were six RN units transferred to the RMN in two groups, four in 1958 to 1959 as minesweepers and two in 1966 as patrol craft. These modern vessels had a relatively short service period of about eight years in the RMN compared to other vessel classes in the RMN. The last two units were most likely to have had their sweeping gear removed and replaced with twin 20 mm guns for service as patrol crafts as they were found as a class too small to effectively act as minesweepers. They may have found more success in this role as their names were subsequently transferred to the FAC(G) squadron when the units entered the RMN service. 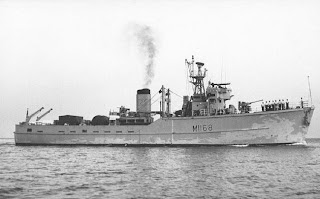 To strengthen the defence of the Malayan waters during Konfrontasi, the RN transferred to the RMN six of these modern coastal minesweepers in three groups with the first unit in 1960, three units in 1963-1964 and the last units in 1966, to make up the 25th Minesweeper Squadron. Unlike the Ham class minesweepers, they were more successful in service with a longer service history with the RMN. All the Ton-class minesweepers underwent modernisation in 1972-1973 but from 1977 to early 1980's they were deleted to make way for Lerici-class MCMV's. 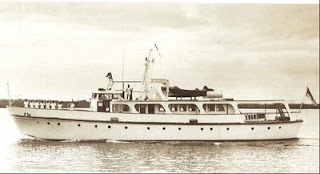 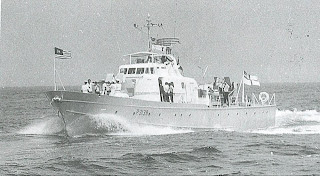 In 1961, the RMN announced the purchase of Vosper type patrol boats to replace the Royal Navy transferred Seaward Defence Motor Launches. The first of 6 Kedah Class boats was launched in 1962 with a 3500 Horse-powered Siddeley Maybach diesel engine providing a speed of 25 knots. These patrol craft form the simple and reliable basis of the navy's fleet and serve as the splendid workhorses of the RMN. It was an extremely seaworthy craft and remained very operational, more often than not shouldered duties far superceding their design and initial role. During the Confrontation period, several of the patrol craft spent periods of up to a total od 280 days each away from their main base each year. 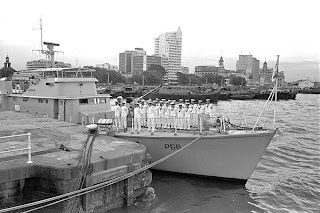 KD Panglima was built at United Engineers Singapore and launched on 14 January 1956 to the design of the British Ford-class SDML. Inheriting the names of her two previous predecessors in Singapore naval service, It was a much better equipped ship than the previous two vessels, being fitted with an assortment of modern equipment such as Sonar and Radar. With a maximum speed of 15 knots and a range of 3000 miles, it became an essential member of the MRNVR in its fight against piracy and illegal smuggling. The history of the Panglima continued into the merger of Singapore into Malaysia she was transferred to the RMN when Malaysia was formed in 1963. In the RMN, she was successful in capturing 4 Indonesian infiltrators in Johor waters during the Confrontation. Malaysia returned her to Singapore in 1967 after Singapore's secession. 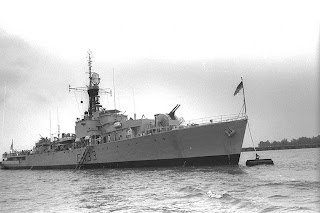 The Royal Malaysian Navy's training ship KD Hang Tuah was mothballed at Woodlands naval base in Singapore on May 30 1977 - after 43 years service, including 12 1/2 years in Malaysia. The 2,000-ton Modified Loch Class ASW frigate was bought by the RMN in early 1964 and refitted in England before being commissioned at Portsmouth on October 2, 1964. On arrival in 1965, she was made the RMN's flagship and took over guardship duties off Tawau from HMAS Yarra and carried out a number of bombardments against infiltrators in Sabah during the Indonesian Confrontation. In 1971, she was turned into a training ship, a role she assumed until deactivation. 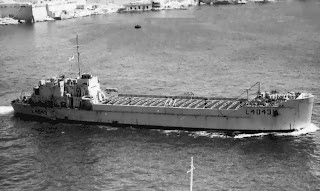 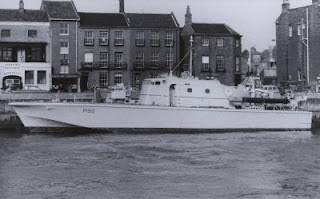 An offensive capability was acquired with the purchase of these Fast Attack Craft in 1964 that brought the RMN into a new era. These Perkasa's were modern vessels that can reach a speed of 57 knots on gas turbine, but were weaken by a lack of endurance. Due to their speed and ability to attack with torpedoes, they were only used for special operations rather than for general patrol duties. In 1971, they were retrofitted with SSM's to become the first RMN vessels with anti-surface missile capability. Later in the year, these missiles were subsequently test fired by KD Gempita against a sea-towed target by KD Mahamiru with success, therefore becoming the first RMN operational warship to fire an SSM. 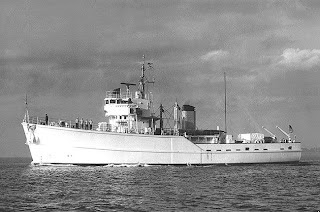 The navy's first hydrographic vessel, KD Perantau, was a converted Ton class CMS transferred by the Royal Navy in 1968. She has participated in five joint-surveys of the Straits with Indonesian and Singapore, and has helped to update the old British Admiralty sea charts. After serving for more than twenty years she was replaced by a modern ship that took on her name. She was expended in missile firing test in 1991.

One of the few specialised vessels in the RMN's fleet was a diving tender that had the mission of supporting naval divers for their dangerous missions at sea. Built by Kall Teck PLC of Singapore, KD Duyong means "mermaid" in Malay and has been in the forefront of many rescue missions since it was commissioned in January 1971. The vessel is also used in the training of navy divers and PASKAL (Special Naval Force) personnel or naval commandos. The vessel has a range of 1,000 miles and is manned by a complement of 23 officers and ratings. Being a diving tender, KD Duyong is lightly armed with a 20 mm gun. For operations with divers, it has a decompression chamber and can act as support ship for up to 10 divers.

Realising the need for larger logistic transports than was available at the time, the RMN obtained the KD Sri Langkawi as their first Landing Ship Tank (LST) class vessel. The 511 class LST was initially loaned buy the US navy to the RMN in 1971 but purchased outright later in 1974. She was actually a replacement for her namesake, the much smaller LSM-sized British LCT Mk 8. The KD Sri Langkawi was herself finally scrapped n the 1980's. The two later bought LSTs were named after islands off Sabah and called KD Sri Banggi and KD Raja Jarom. They were used as tenders to the light forces such as patrol boats during operations and as a troop transport for security forces between Peninsular Malaysia and Sabah and Sarawak. Built for the United States Navy in 1944, the ships were in service during the Vietnam War before they were sold to Malaysia on October 7, 1976. The decks of these 103-meter vessels have been modified for helicopter landings midships and each LST has capability to carry up to 2,100 tonnes of cargo. Both the ships were decommissioned in 1999, after carrying numerous amphibious operations with the nation's armed forces and joint operations with foreign armed forces, as well as providing hands on training for naval officers and personnel of the naval reserve units. 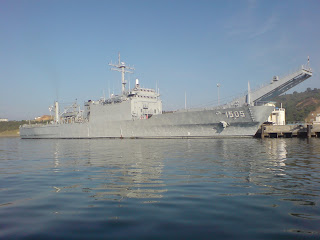 In the early 1990s the RMN needed more specialised vessels for their amphibious and logistics needs as the existing WW-II era LSTs were aging and were no longer able to provide sufficient support to the fleet and the subsequent purchase of a Newport class LST KD Sri Inderapura alleviated the requirement somewhat. KD Sri Inderapura is a Newport class landing ship tank (LST) acquired by the Royal Malaysian Navy from the United States in 1994. The refurbished vessel, which had served in the Gulf War, Somalia and Haiti among others, was commissioned into service with the navy on January 31 1995. With the presence of the KD Sri Inderapura, the RMN's sea-lift capability has been tremendously boosted. Currently the largest ship in the RMN's inventory, the LST is capable of offensive assault operations in war and humanitarian rescue and support missions in peacetime. This will allow the navy to play a bigger role in supporting mass troop movements such as to transport Malaysian soldiers serving as peacekeepers overseas including their equipment. The RMN could not previously carry out such missions unilaterally as its capacity was limited and it was uneconomical to do so compared to using the services of merchant vessels. The KD Sri Inderapura however can support these missions when merchant ships refuse to go into certain areas owing to the risks involved. The vessel is capable of carrying up to 25 armoured carriers or 500 tonnes of cargo, 400 troops and 4 LCVP's at any one time. For self-defence, the vessel is fitted with an anti-guided missile system capable of firing 3,000 rounds per minute. In the RMN fleet, the ship will not carry and land marines on hostile shores as she was used to under the US Navy but will find new roles when operating in the region. Although she had already proven her usefulness in several operations, plans for the induction of another similar LST died a stillborn death as the RMN determined that no more acceptable ships of the class are longer available from the United States Navy (USN)’s transfer pool. She was damaged in a fire in 2002 but was repaired but a second fire that occured in October 2009 effectively ended with her in being stricken from the fleet as it was found that it will not be economically effective to be repaired again for active service.