From The Pirate's Mouth

To those of you who had wanted our government and our navy to go in with guns blazing as what the French did in their rescue of their yatchs, then this interview with one of the Kingpin's of the Somalian pirates would serve to illuminate what holds in wait if we had just done that to rescue our two larger tankers, whether it was successul or otherwise. At least consider the fact that our merchantmen still has to move in such waters after the inicident, and our government cannot afford to provide convoy escorts forever that would be especially needed if we had gone in like what some had wanted to. The possiblities of reprisal would have required at least that. Read on and try to understand that. 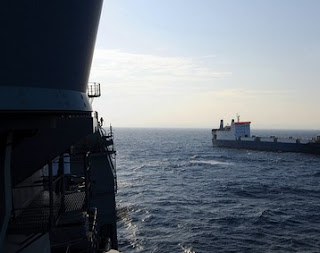 Somali pirates last September captured a Ukrainian cargo ship, the MV Faina, loaded to the gunnels with heavy weaponry, including 33 Russian-designed T-72 battle tanks. Since then, American and Russian naval vessels have been shadowing the ship at its anchorage off the fishing village of Hindawao, 300 miles north of Mogadishu. This month there were reports that the ship's owners had agreed on ransom terms, but the Faina and its crew are still being held. NEWSWEEK's Rod Nordland interviewed Shamun Indhabur, who is thought to be the leader of the pirates who took the Faina, and the Sirius Star, a Saudi supertanker with $100 million worth of oil aboard. The interview was conducted by satellite telephone to the bridge of the Faina, through Somali translator Abukar al-Badri. Excerpts:
NEWSWEEK: What is your background, and how did you capture the MV Faina?
Shamun Indhabur: I was a fisherman before I turned to piracy, a crewmember of a small fishing boat. We used to capture lobsters and sharks. When we hijacked MV Faina it was early morning 24 September 2008, in Somali waters. We took it after 60 minutes of fighting between the crewmembers and our gunmen and eventually the captain decided to surrender after we fired some rockets to warn them that we were close to destroying the ship if they didn't surrender. The captain tried to escape, but he didn't succeed. He had a pistol and he refused to surrender until we were close to killing him. When we intercepted the ship and saw the shipment [of arms], then we thought it was going to Somalia and belonged to the Ethiopians [whose army is supporting the transitional government in Somalia], but the captain told us that it was going to South Africa. Then later we saw that it was going to southern Sudan, after we forced the captain to show us the manifests.
What's the situation on board the Faina now?
The middlemen tried to steal some of the money we agreed on [estimated at more than $3 million]. And now we can't trust them. They're trying to take the money, and we are the criminals. We can't accept that.
How are your ransoms paid?
We get the money two ways. A boat takes the money from Djibouti, then a helicopter takes the money from the boat, then it drops the money in waterproof cartons on assigned [small] boats. Then we collect it, check if it is false or not, then we release the ship. The other way we get the money is a boat from Mombasa.
Isn't it dangerous for middlemen to be carrying so much money into a lawless place like Somalia?I've heard some of them have been killed doing it, is that true?
The pirates are different groups. Those in Puntland may have problems with the middlemen and sometimes kill them. 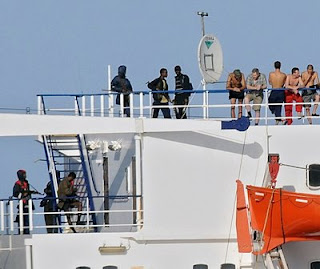 Why has there been such an increase Somali piracy?
In Somalia all the young men are desperate. There is wide unemployment in the country, there are no sources of income. One of the only sources we have had is fishing, and the superpowers and Asian countries sidelined us in our own sea. So at first we started out just to counter illegal fishing, but international forces started to protect them.
Now the European Union is sending an additional naval force. Are you worried about the increased naval presence?
We know the EU and NATO forces are coming, but that is not the solution. The solution is to restore peace in Somalia so that we can have a better life and more job opportunities. I can tell you that sending forces will not stop us going into piracy. They can arrest us if they find us out at sea, they've arrested our friends several times, but that will never deter us from this business. The only thing that can stop piracy is a strong government in Somalia.
The most friendly forces in Somali waters are the U.S. forces. They arrest us and release us, because they know we are not going to hurt them. But the French and the Indians treat us badly and sometimes they don't know what they're doing. The Indians sunk that Thai boat [a fishing vessel reportedly taken over by pirates this month] and said it was pirates, but I tell you there was not a single pirate on that boat.
Are you worried about another attack ashore, such as the one the French conducted, now that the U.N. has approved such attacks?
The French forces made two attacks. They arrested our friends, but French nationals will pay for that. If we get a ship with French nationals, we will punish the crew and they will pay double ransom. We're not worried about another attack [against pirates on land], because now we are on very high alert and they will never succeed with another raid.
You justify piracy against all shipping even though your only complaint was against foreign fishing boats operating in your waters. Does that really make sense?
I justify it as a dirty business encouraged by the foreign forces that were escorting illegal fishing boats and toxic waste dumpers. And if they are escorting fishing boats, they can't escort all commercial shipping, and if we are forced to avoid fishing our waters, then those [commercial] ships are all our fish.
How do you justify attacking pleasure yachts hundreds of miles offshore, or cruise liners, or even any vessel so far from Somalia?
Luxury yachts are what we are looking for, because what we need is money, and if we get a luxury yacht, we make a fortune.
Some ships have started putting armed guards on their vessels. Others have used weapons such as sonic guns, which use beams of loud noise to deter pirates. Does any of that worry you?
It will not protect them. We also have rocket-propelled grenades and we can destroy them. For those with the sonic guns, we hijacked some of them even after they fired the sonic guns. Truly speaking, when we go to sea we are drunk, and we are like hungry wolves running after meat. We don't even know what we are doing until we have boarded.
Some of the leaders of the Islamists now fighting the Somali government have criticized pirates for giving the country a bad name, and for attacking Muslim-owned ships like the Sirius Star.
The Islamists have a memorandum of understanding with us. What they are saying to the media is not their real position. They just want to send a message to their Arab friends who sometimes fund them.
What if the Islamists come back to power?
The Islamists are not homogenous groups, they are heterogeneous. I can guess they'll never come back to power as in 2006, but they can fight one another and create a huge mess. If they did take power, they must restore law and order and create job opportunities for us. If they don't, then piracy will never stop.
How are the Somalipirates organized? Do you all coordinate your actions?
The pirates belong to different groups, but we have umbrella groups. There are two main groups, one in Puntland and the other in south and central Somalia, which is my group. I am a member of the seven top committee members in south and central. We are a group of men with norms and terms, and we respect them. 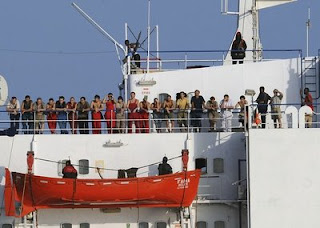 The pirates holding the Sirius Star have threatened to dump its oil if their demands are not met. Is that a serious threat, and do they realize how much damage that could do not only to Somalia but other countries as well?
Those holding the Sirius Star and the MV Faina I'm aboard now, we are the same group. And we know the risk of spilling the oil shipment. But when evil is the only solution, you do evil. That is why we are doing piracy. I know it is evil, but it is a solution.