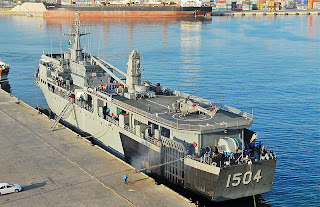 I am a bit chuffed because this time the return of KD Mahawangsa from Ops Fajar did not get wide reporting either by the newspapers or TV, especially my favourite TV news Buletin Utama on TV3. Maybe the media did not consider their service of safely escorting Malaysian merchant ships convoys as prime news even though to me personally this service is far more important and strategically significant to our nation's interests than the rescue of our hijacked ships and crew, and it has taken more character and fortitude for our naval men to carry these duties and tasks over the long deployment period. At least I have read in one blog how vital the convoys are for our ships to ensure their safety rather than trying to sail on their in the Gulf of Aden. 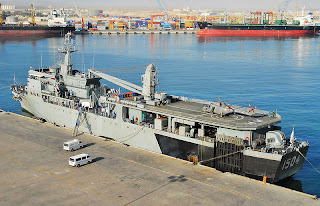 Such personal writing is definitely more interesting than the sterile news reporting like the one below by Bernama eh, which was only picked up in parts by the New Straits Times as a news feature in their today's printed version . Meantime I am left with only photos of KD Mahawangsa's recent berthing in Oman to feature here as accompaniment to this post.

Confirming the pirate hijack of a Malaysian tug boat off Yemen yesterday, the National Security Council is now awaiting the latest development on the incident.Foreign Minister Datuk Seri Dr Rais Yatim said the council had not received any report on the hijack and was worried over the fate of the crew.He said Malaysia had reported the hijack to the United Nations and pressed the need for drastic measures to be taken against Somali pirates."The council is expecting a report either tonight or tomorrow morning," he told reporters after attending the ministry's Excellent Service Awards here.AFP reported that pirates had hijacked a Malaysian tug boat and a Turkish cargo ship yesterday, and attacked three other vessels in the Gulf of Aden in the past week.The tug boat with 11 crew on board was heading to Malaysia from West Asia.In three other incidents last week, Somali pirates attempted to hijack a Singapore tanker, an Italian cargo ship and a Greek ship.Meanwhile, Rais described the United Nations Security Council resolution to combat piracy as "powerless"."Merely announcing it is of no use, it must be followed up with physical force," he said.

In LUMUT, Acting Royal Malaysian Navy (RMN) chief Vice-Admiral Datuk Mohammed Noordin Ali said that next February, the RMN would cease ongoing 'Ops Fajar' operations to protect the country's commercial vessels from pirate threats in the Gulf of Aden near Somalia.He said the decision was also agreed upon by Army chief Gen Tan Sri Abdul Aziz Zainal.Mohammed Noordin said any decision to resume operations would depend on the prime minister, defence minister and the National Security Council.He said the decision to stop the operations was mainly due to its exorbitant costs and RMN obliogations to protect the sovereignity of the national waters.Mohammed Noordin said this after receiving RMN vessel 'KD Mahawangsa' which had returned from Ops Fajar at the RMN Lumut base today.Another RMN vessel, 'KD Indera Sakti', is expected to conclude the operation in February.'Ops Fajar' was launched after Malaysian International Shipping Corporation (MISC) vessel MT Bunga Melati Dua was hijacked by Somalian pirates in the Gulf of Aden while heading to Rotterdam from Dumai, Indonesia on Aug 19.Ten days later, another MISC vessel, MT Bunga Melati Lima, with 36 crewmen, was also hijacked while crossing the same waters.Meanwhile, a Wisma Putra source identified the two ships as those of the AMD 1 cargo ship and Masindra 7 tugboat.The source said that a National Security Division meeting was held at 2.30pm today to discuss the matter.No Malaysians were involved in the incident as the crew members of both vessels were Indonesians, he said.-- BERNAMA