So Who Owns The Ouessant Actually?

There has always been a question mark from the general public on the actual ownership of the Agosta 70 class submarine Ouessant used in the training of the Malaysian submariners in France. The confusion arises because early reports on Malaysia's acquisition of 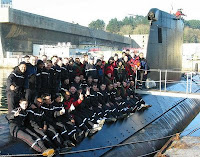 the Scorpene Submarines stated that package included the purchase of the Ouessant. Nonetheless the actual training agreement with DCI (Défense Conseil International) and their submarine training unit, NAVFCO in 2003 actually calls for the training of 156 submariners in NAVFCO Submarine school in Centre d’Instruction Naval (CIN) Brest, France for the formation and training of a submarine corps. This includes physical training on board the Ouessant, rehabilitated by DCN in 2004 after deactivation by the French Navy in 2001, by a crew detached from the navy to man the submarine while she is being used in the initial training of the Malaysian submariners. Thus this makes the submarine unique in being civilian owned but maintained by military personnel in France. So it is no surprise that she flies the French flag while transitting Brest in 2007 as in the picture above. Unfortunately this fact is only well documented in a French website but should be easily translated in the net. 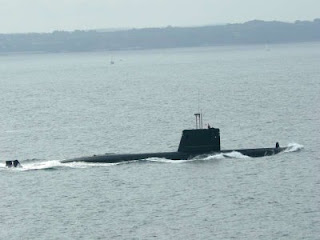 As for the future of the Ouessant after the end of the Submariner's training this year, the current RMN CNO Datuk Seri Abdul Aziz Jaafar in an interview last April by Defence Site KLSR emphatically stated that she will

not come back to Malaysia to serve in the navy. This is because Ouessant is almost 30 years old so it will be very hard to get spare parts for operational use and Malaysia also does not have skillful personal to maintain and service her. Nonetheless the CNO left open the possibility that she may retur 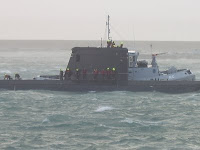 n as a museum ship as she has significant historical value for RMN and is an important part of the RMN’s effort to establish submarine fleet. Nonetheless whether any money can be made available for this venture in the budget-tightening situation the armed forces is facing remains to be seen. Maybe the Perak State Government can include this in their proposed Lumut Waterfront project that includes a maritime museum complex. What do you say?
Posted by mumuchi at 9:21 PM