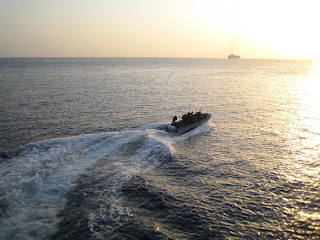 As reported recently in the Berita Harian and Utusan Malaysia, the Malaysian Armed Forces (MAF) has decided to end their Ops Fajar in the Gulf Of Aden due to high costs of operations to continue the operations indefinitely. This would mean our naval ship KD Mahawangsa will no longer be shadowing our merchantmen through dangerous water as beautifully captured in these photos by Blogger Dukerobin in his blog. Despite some other bloggers efforts to discredit our navy's role in this operation, this MISC sailor that is actually experiencing the naval assistance clearly appreciates the security provided especially by the navy's own Paskal men presence on board throughout their journey from the Gulf to the Red Sea, as the pirates still continue to take merchant ships hostage despite the increase of naval presence in the area. 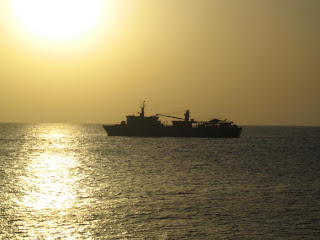 Let not the taking of another of our ships force our hand again to send our naval ships there to provide naval security for our national assets in the area. Our shipping companies and the MAF must come up with a reasonable security solution for the ships passing through the are, and soon. Posting our Paskal men on board after embarking from a safe port after dispatch by air to provide security in the area before disembarking at the other end and returning home may allow irregular presence in the are without constant deployment of our naval ships, thus reducing overall cost. Just my two cents to put into the discussion hat.
Posted by mumuchi at 9:22 PM