In The Finest Traditions Of The Navy

It is in the mists of time that sometimes it may be lost the reason why a naval ship is so named, especially since some navies like the Royal Navy as a tradition to rename their important ships with historic ships’ names in not only to commemorate their bravery but also with the hopes of continuing the fighting tradition of their predecessors. Many may not know it but the naming of the our new generation patrol vessels can trace their origins to the armed merchantmen that fought their Japanese navy ships despite overwhelming odds, and the most famous amongst them the HMS Kedah has oftentimes became the leading ship of the class. Thus it is through this tradition from

the Royal Navy can our foremost stone frigate the KD Malaya trace the roots of her name to one of most important battleships of her era that bravely fought not in one but two world wars, thus no one can say the name was given in a vain glorious effort to mark our nation’s antecedent name but more to continue the tradition of venerating historic ships names to express the hopes that our fledgling navy would continue to uphold the fighting qualities the name embraces.

HMS Malaya was one of five great fifteen inch gun, oil burning super dreadnoughts of the 1912 Queen Elizabeth class and was named after the British colony that paid to build her at a cost of almost three million Sterling Pounds. This division of large, fast, heavily armoured ships, powered by oil and carrying heavier guns than on any previous dreadnought, played a decisive role in the Battle of Jutland, the apex battle between the Royal Navy and the Imperial German Navy

in World War I. The dominant naval weapon of the era was the great gun: the long barrelled naval cannon that fired a heavy shell down a rifled tube, lofting the spiralling projectile thousands of yards to plunge onto an enemy ship, piercing and penetrating heavy armour to burst inside turrets or hull, spreading fire, devastation, chaos and death. The new ships could deliver a knockout punch with their large guns; it remained to provide them with armour and speed. In these ships there was no skimping in armour; key areas such as the waterline and turrets were covered by thirteen and a half inches of solid steel. These ships could now deliver and take a punch but speed was wanted as the standard twenty one knots of a British dreadnought was not sufficient to overtake a fleeing enemy and bring them to battle. Armour would not be sacrificed for speed and the soluti

on is oil fuel as it burns more fiercely than coal and gives more heat and steam created under more pressure drove the shafts and turned the propellers quicker thus achieving speeds of 26 knots. Immeasurably superior to any earlier battleship, they continued to form the backbone of British naval strength well into the Second World War. And HMS Malaya was present at the surrender of the German High Seas Fleet as a reminder that Malaya as one of the Dominion states had made her contribution to the war at sea. In World War II she served in the Mediterranean in 1940, escorting convoys and operating against the Italian fleet. Latterly she served escorted convoys in the Atlantic and from the UK to Malta and Cape Town until summer 1943. Malaya was withdrawn from service at the end of 1944 and placed in reserve and served as an accommodation ship. Sold on 20 February 1948 to Metal Industries, she arrived at Faslane on 12 April 1948 for scrapping.

Point of a German 12inch shell which struck HMS Malaya in the Battle of Jutland, 31st May 1916.

The name Malaya was again resurrected after the war when the name was given to a LCT Mk3 that was inducted into service into the Malayan Naval Force on 18 April 1949, after conversion into a training and accommodation ship before entering service to serve as a 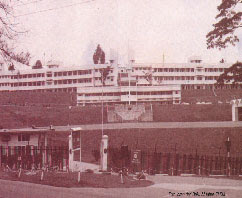 training ship as the MS Malaya. The name was later transferred to an operational and training base built at Woodlands Singapore that was known as the HMMS Malaya in 1952 and was transferred to the newly independent Malaya in 1958 until being renamed as Kapal Diraja Malaya in 1961 after the navy dropped the old HMMS as a relic of colonialism. In 1984, KD Malaya that was serving as a support unit finally moved from Singapore to Lumut. Now serving as Fleet Headquarters, KD Malaya is still expected to be in the thick of action when the situation heats up even though she is now a stone frigate rather than a fire breathing combat ship that was her namesake, and therefore will carry on the fighting traditions as befitting the name.
Posted by mumuchi at 7:50 PM

My late dad-in-law was in the navy. I googled for KD Malaya and found your cool blog. KD Malaya was not a ship rite?

Yes. Other than the 1st LCT, the name Malaya was only used as the name for a 'stone frigate', ie, a land naval establishment in our navy.