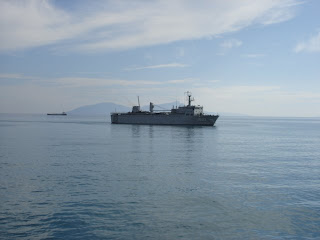 It is ironic that after my previous post, it has come to light that on the day our brave men on KD Mahawangsa came back from their deployment unheralded by the media, the naval vessel that took up their stations in the pirate infested waters of Somalia was called into action to save a Chinese merchant vessel, beating off the pirates with shots from the ship and her helicopter. Only now are our media trumpeting the effort to the public after the fact. Sadly KD Inderasakti herself could not save Malaysia's own ship that was hijacked on the same day, but with only one vessel in the area what do you expect when the so-called Naval Coalition in the area admitted themselves that they do not have enough ships to effectively cover the whole area in order to keep the ships transiting the area from harm. Anyway this incident marks the first time our naval ships has fired in anger in an international operation, and thus proves they have the will and the teeth to do harm if necessary, despite claims of cissyness by some dumb Malaysian bloggers who were disappointed that we did not go in with guns blazing when we rescued the MISC ships. We would not want to repeat the Indian Navy's gung-ho mistake of sinking the victim's ship while the pirates' got away scot free, do we? Especially when the rules of engagement are still not clear, and for those nay-sayers who wonders why we did not manage to capture the pirates themselves, this is the reason why our men did not engage to capture the pirates as your bloodthirsty hearts may have wanted. I quote below : 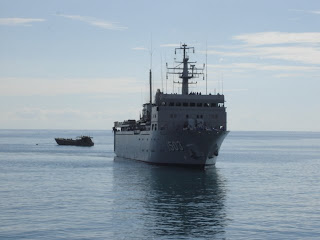 According to a duty officer at the Piracy Reporting Center in Kuala Lumpur, Malaysia, a nearby Malaysian warship was alerted and sent a helicopter to the scene. When the helicopter fired around the Chinese boat, the pirates panicked and fled in a speedboat.The Malaysian warship did not apprehend the pirates, Mody said, because international rules are still unclear about where the pirates could be detained and how they could be tried. "That's the main reason the navies don't pick up pirates," he said. "Once you've got them, what do you do with them?"