Over The Horizon Protection 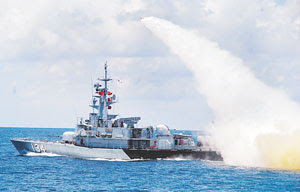 In naval warfare, the ability to hit the enemy without the enemy seeing you is a highly desirable capability and thus Over The Horizon (OTH) missile shooting capabilty, though coveted by many navies, is only capable to be carried out by only a select number of navies in the world. OTH is the ability to shoot a target over the horizon where due to the curvature of the earth, such a target is usually unseen by a naked eye and such targetting is usually assisted by a third party who acts as the eyes for the missile launching unit to guide the missile in midflight. Well let me stop boring you with the technical details but the Royal Malaysian Navy joined the OTH club when they inducted the Laksamana-class corvettes, armed with 180 kilometres range Otomat missiles. Paired with a helicopter through a teleguidance system, the missiles are able to hit a target that may be too far to locate the small sized missile corvette, allowing the corvette to punch beyond its weight class. Yesterday the RMN conducted such an OTH missile firing exercise in the Malacca Straits using the Laksamana Nadim as the launch unit, and the target was hit successfully from sixty kilometres away, proving the missiles that has been in the navy's inventory since 1996 is still a deadly killer. Following is a video of the successful missile hit as taken from last night's Buletin Utama news bulletin from TV3.
Posted by mumuchi at 9:11 PM