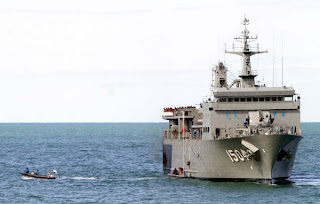 It is with a sense of pride when I read in the Malay newspapers that the Armed Forces Ops Fajar operations in the Gulf of Aden continues with the stationing of the KD Mahawangsa. The Fleet Operations Commander of the Lumut RMN Base, Vice Admiral Datuk Ahmad Kamarulzaman Ahmad Badaruddin who was also Ops Fajar task force commander announced that to date KD Mahawangsa has escorted 16 national owned merchant vessels including tankers and container ships through the piracy filled waters. KD Mahawangsa remains stationed at the gulf to escort Malaysian merchant ships plying the pirate-infested waters and to monitor the situation under Ops Fajar and will remain for an undetermined period until the situation is alleviated. This proves that Ops Fajar is no waste of money as it has secured safe passage for our vessels through such troubled waters. Nonetheless Shipping companies should invest in security measures and not depend on the country’s security vessels, including the Royal Malaysian Navy (RMN), for their safety as the RMN could not be accompanying commercial vessels especially those which pass through the Gulf of Aden as the operational cost was high, said , Vice Admiral Datuk Ahmad Kamarulzaman Ahmad Badaruddin. Thus when I read this comment "The presense of KD Mahawangsa tasked in escorting Malaysian commercial vessels convoys through the water is understood not only to give a sense of security to our ships but other nation's ships in the are" got me thinking, shouldn't we start charging for these ships if they come under our navy's security umbrella.
Posted by mumuchi at 9:19 PM