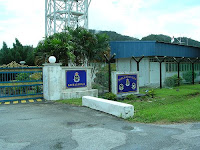 ir wing was incorporated with the purchase of six used WASP HAS Mk 1 helicopters and spares from the Royal Navy, operating from a site at Naval Bouestead Dockyard at the Lumut Naval Base. Starting with a dream in 1984 when a group of eleven naval officers received flight training at the Royal Malaysian Air Force’s PULATIBANG Johor, the acquisition of the helicopters paved

the way for the Navy’s ambition to have an air unit to provide force multipliers to the Navy‘s fleet while opening up new capabilities for the RMN in multidimensional maritime warfare. The force multiplication embraces over the horizon operations, faster and more effective search and rescue, Special Forces operations, electronic intelligence and monitoring, anti submarine warfare and as a platform for missiles and torpedoes amongst others. This is in addition to increasing the capability of monitoring the nation’s maritime waters from the air as the air wing provides aerial surveillance over a larger ar

ea than that can be provided by surface ships only. Finally on 11 May 1990, KD Rajawali was commissioned as the first Naval Air Station of the Naval Air Wing. In its early years, the air wing was assisted and supervised by Royal Navy loan service personnel and the Royal Malaysian Air Force but despite many parties doubting the capabilities of RMN’s own personnel to handle and service their own air wing; by 1994 KD Rajawali became independent and was fully managed by RMN’s own personnel.
These early beginnings was part of a long term strategic measure f

or the RMN as it allowed the Air Wing to learn and deepen their knowledge in the various aspects of helicopter operations in maritime warfare scenarios including logistic support. Such operational experience is not only limited to the people of KD Rajawali but is also shared with the navy’s fleet personnel when the Navy trains their pilots and air engineering team to carry out various maritime operations with the fleet’s ships. This is because the role of KD Rajawali is primarily to meet the aviation support for the surface fleet of the Navy, in times of peace and war. These roles include reconnaissance, search and rescue, oil spill detection, trans-border criminal activities inte

rventions and oil platform and EEZ protection. Vast emphasis therefore is placed on training of personnel, enhancing flying skills and expanding the air wing so that it will not only be able to operate rotary aircraft currently but fixed wing maritime patrol aircraft in the future. With the entry of such aircraft and training of its personnel in advance flying and weaponry, KD Rajawali is geared to meet the many challenges ahead as the Fleet Air Arm of the Navy. What is unique about the Air Wing is that with the procurement of twelve new highly sophisticated naval helicopters; the RMN now owns the most modern and capable combat helicopter fleet than the other branches of the Armed Forces. 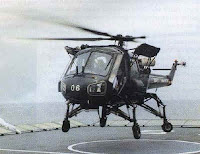 given the designation of 499 Squadron. The used Wasp HAS Mk1 was designed for short range quick action to hunt for warships or submarines and had unique attributes for maritime use including night operations. Even though the more than thirty year old helicopter was not equipped with modern and sophisticated equipment, its effectiveness was proven during the Falklands War. The Wasp helicopter was operated by two aviators and could carry three passengers and a payload of 635 kilograms, including up to 235 kilograms external stores and two lightweight torpedoes. With its Rolls Royce Nimbus engine the helicopter could sprint at a speed of 90 knots. The Wasp could be armed with torpedoes and anti-ship missiles. Until they were decommissioned on 21 December 2001, a total of twelve units were operated by the Navy for a duration of eleven years. During the period, the pioneer squadron’s service record of ten thousand accident free flight hours and more than five thousand deck landings, mostly on RMN’s ships. Despite this, the Wasps services had to be stopped as the aging helicopters operational cost were increasing making no 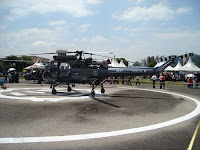 longer economical to operate. This was compounded by the difficulty in obtaining spares parts as the type was no longer

operated by other navies, resulting in parts cannibalisation from unserviceable units. The decommissioning of the helicopters was also in line with the modernisation of the navy with more sophisticated and highly capable equipment as the squadron paved the way to the establishment of two new squadrons of modern helicopters. Even though the capabilities of the Wasp were limited, it still allowed the RMN to gain experience in operating an air squadron. Nonetheless 499 Squadron still remains and now plays the role of ground support services and logistics squadron to KD Rajawali.

In line with the modernisation and development of the Navy and the necessity of to replace the Wasp helicopters, six Super Lynx 300 Mk 100s from Agusta Westland were purchased to provide a new dimension to the operational and combat capabilities of the Royal Malaysian Navy in carrying out conventional naval warfare. This acquisition gave a clear leap to the Navy’s air unit capabilities that was previously restricted to the short range Wasp for patrol and surveillance. With the Super Lynx, the squadron now acts as the 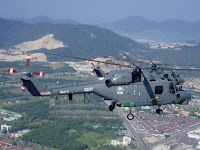 combat squadron for the air unit responsible for critical missions and contributes directly to multiplying the Navy’s firepower to destroy the enemy. The main task of this squadron can be divided into four main missions; Anti Surface Warfare (ASuW), Anti Submarine Warfare (ASW), surface surveillance and Over The Horizon Targeting (OTHT) in addition to their multitude of secondary missions. Two features that make the Super Lynx as a combat and mobility force multiplier is that it carries the latest avionics suite and weaponry. As the most capable helicopter unit in the Navy in terms of firepower, the helicopters are armed with four types of weaponry. These are Sea Skua Anti Ship missiles, A244S torpedoes, a .50 calibre M3M heavy machine gun system and TG2 teleguidance system. As an 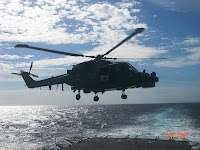 aircraft that is operating in a challenging maritime environment, the Super Lynx are well equipped with sophisticated radar systems, sensors and electronic support systems including radar warning receivers. The range of both the semi-active radar-guided Sea Skua missile and the Seaspray radar is approximately 25km, which gives a stand-off capability to the helicopter. These are new capabilities for the Navy to operate w 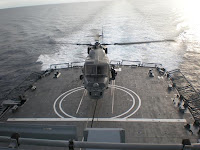 ith an edge in a conventional maritime warfare environment. The Super Lynxes also allows special operations with the Navy’s PASKAL Special Forces as an insertion and extraction vehicle, and as a platform for sharpshooters or provision of suppression fire from the heavy machinegun. The Super Lynx helicopters are organic to the Lekiu class frigates but will also operate from other vessels with helicopter facilities like the Kedah class patrol vessels. The 501 Squadron officially became operational on 1 March 2004 but was subsequently commissioned simultaneously with the 502 Squadron on 9 August 2004. 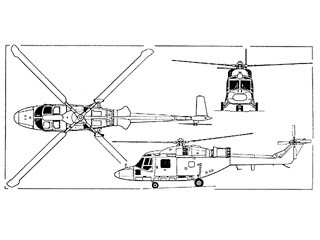 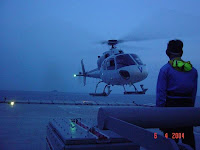 While awaiting the delivery of the Super Lynx helicopters, the RMN leased two units of AS355

F2 Ecureuil so that KD Rajawali can continue operations after the Wasp helicopters were decommissioned. So it was no surprise that during LIMA 2001, an agreement to purchase six units of the naval version AS355 SN Fennec was signed and the 502 Squadron officially became operational on 28 April 2004. Specifically the primary role of the squadron is to act as a training platform where the Fennec acts as the Lead In Trainer for the Navy’s aircrew and technicians. The Fennec is also the secondary aircraft for the Navy’s maritime combat operations in support of the Super Lynxes. Thus the helicopter’s supporting roles are surface surveillance, naval gun fire support, reconn 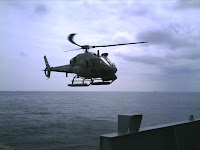 aissance and search and rescue in addition to general duties. The Fennec can also assist navy divers in mine clearing operations by using the hover jump technique where the mine clearance dive team will make a direct dive into the sea from the helicopter. It is also tasked to support the Malaysian Maritime Enforcement Agency for littoral operations and enforcement. Unlike the 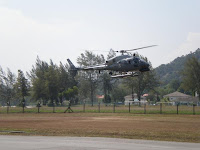 Super Lynx, the Fennec is not armed with heavy weapons and is only equipped with a door mounted MAG 58M 7.62mm machinegun. Since the Fennec’s duties are littoral focused, she is equipped with a 240 kg load winch on the port side and a 30 million candela powered search light for night operations. The Fennecs are supposed to be organically detached to the Kedah class patrol vessels while for operations support, they will be short termed deployed on any ship that has a helideck and flight facilities.

Finally on 11 May 1990, KD Rajawali was commissioned as the first Naval Air Station of the ... kd7mens.blogspot.com