Filling Out The Needs Of The Navy 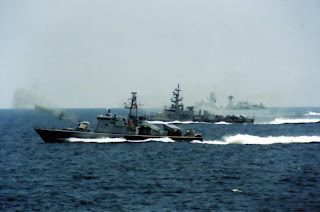 The transfer of seventeen patrol assets to the Malaysian Coast Guard arm including two large Offshore Patrol Vessels has left the Royal Malaysian Navy with availablity of vessels to patrol the vast waters separating both sides of the nation in short supply. The delay in concluding the purchase of two enhanced frigates and the second batch of NGPV and the implementation of the market rumoured plan to procure littoral surface combatants to replace the aging fast attack craft squadrons has further exacerbated the situation. This has resulted in these patrol comb

atants soldiering on in a role they were not optimally designed for, assisted by the other remaining combatants in the fleet the mine counter measure vessels and the sole remaining training frigate as patrol auxilliaries. In addition the repainting of the hydrographic vessels to navy grey with new pennant numbers seems to indicate that these have now taken on a more combatant role than they were when painted in civilian white. Thus it is hoped that the addition of new combatants can be accelerated to relieve the pressure faced by the fleet in securing the nation's maritime borders.
Perdana Class FAC-M 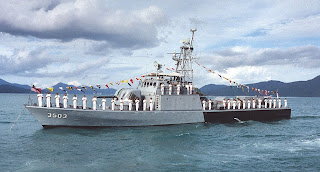 Ordered in 1970, the Perdana class is close to the norm in displacement and dimensions of standard La Combattante IID class FAC(M)s. The main difference is that the Perdana class comes with a modified weapons fit as compared to those generally found in the class. Built by Construction Mecaniques de Normandie (CMN) Cherbourg, the Perdana's are the first Royal Malaysian Navy vessels to be fitted with Exocet missiles for surface warfare. The vessel packs enough punch in her small size for warfare in the relatively shallower and confined waters of the territory where her manoeuvrability and speed is an advantage against larger vessels. This allows the vessels in times of war to operate more effectively in the area's combat operations despite her small size and comparative lack of sophistication although their ESM suite has been upgraded to Thales DR3000S. However, these FAC anti-ship platforms are not adequately defended against air and sub-surface threats and with a limited durability in open seas, makes them unsuitable for long-range patrolling and protecting of offshore installations in the South China Sea. Although not quite with sea denial capability, these FAC's still provide credible enforcement and offensive value to the navy as they can temporarily close off choke points until the more capable navy vessels arrive to take up the fight. Nonetheless recent photographs of the class seems to indicate that their missiles have been removed during operations and now operate as gun equipped crafts only. 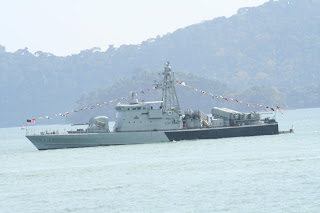 The Handalan class vessels or Spica-M FAC(M) are a heavier variant of the Swedish Spica II (Norrkoping) Class. They were built by Kalskrona Varvet and ordered by the Navy in 1976. The class replaced the Perkasa class FAC-T/M squadron with the names being transferred. Compared to the original Swedish vessel, these vessels come with new longer-range diesel engines and a different weapons fit consisting of four Exocet missiles and an additional Bofors 40mm gun. The bridge of the vessel is also brought further forward to accommodate the Exocet launchers and rear gun. The vessels are additionally equipped with a data-link communications system allowing exchange of data through computer with similarly equipped naval units and shore establishments. They also have elaborate countermeasures, weapon control system and tracking equipment. In addition, a new Thales DR3000S ESM suite has been installed. The vessels of the class are thus more well-armed, more capable and equipped with better radar than the larger sized Perdana class vessels. This makes the vessels in the Handalan squadron a force that cannot be taken lightly by the opposing navy as they are capable of bringing the offensive to the enemy during combat, even without support from the navy's larger units which is contrary to normal tactic of FAC naval doctrine.

The Jerong class is a variant of Lurssen FPB/TNC-45 vessels that was completed to a less formidable FAC-(G ) configuration, with lighter arms and a less sophisticated electronics fit. They were ordered based on three rather than four shaft propulsion arrangement that is common to the class, therefore they were built to a reduced performance specification. Ordered in 1973, the vessels were licensed-built locally by Hong-Leong Lurssen Shipyards under a major technology transfer program. Unlike the missile-armed FAC squadrons of the navy, the Jerong class is equipped only with a main gun for closed-in combat and fire support. As such, they are capable as far as gunboats go for peacetime duties of patrolling the Exclusive Economic Zone, intercepting illegal immigrants from neighbouring countries and conducting anti-piracy operations. However, they are of limited use in a shooting war except for naval bombardment or possibly for guerrilla-type tactics of naval warfare, as hull space constraints do not allow the installation of a sophisticated sensor system and extended operations in open sea conditions. In such guerrilla action, these smaller combatants would still be able to trouble the larger intruders with a 'hit-and-run' strategy by packing a mean punch that belies their small size and lack of high-technology gadgetry. In the meantime, they are expected to assume a greater share of coastal patrol duties upon the final decommissioning of the navy's patrol craft squadrons. 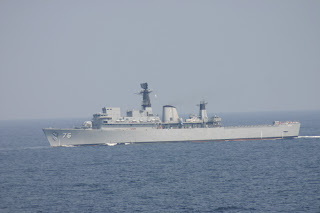 Yarrow's Type 41/61-based frigate was a singleton vessel originally completed in 1966 for Ghana as a presidential yacht and luxury flagship called the Black Star. She was however not delivered for political reasons and languished in the shipyard for several years before the Royal Navy finally agreed to add her to the fleet. She was then retrofitted and commissioned into the Royal Navy as the HMS Mermaid in 1973 for an Anti Submarine Warfare(ASW) role, mainly in Singapore. Her appearance was unlike any Royal Navy frigate at the time though her hull and machinery was based on the type 41/61-class frigate. Instead of a raised forecastle common on frigates of these classes, she had a flush forecastle deck and was also given an additional funnel. Another unusual feature of the Hang Tuah is in that she had an exceptionally short forecastle deck of only 21 metres, compared to other frigates of similar displacement. And as a legacy of her original mission design, she also had a less capable weaponry and electronic suite that did not enable her to act as a frontline warship in the Royal Navy fleet. After being withdrawn to fisheries protection duties in Iceland, she was offered and transferred to the Royal Malaysian Navy(RMN) at a friendship price as a replacement for the elderly Loch class frigate the navy had at the time. Emerging from a refit at Vosper Thornycroft, she sailed to Malaysia in August 1977. The vessel then became the second frigate in the Royal Malaysian Navy to bear the name of legendary Malay warrior Hang Tuah. She was at the time regarded as a major upgrade for the nation's small navy, naturally becoming the flagship for the fleet upon arrival. Refurbished, re-engined and overhauled in 1997 to give her a new lease of life, she is now used as a training vessel in addition to carrying out general patrol duties. Despite her age, Tuah can still hold her own with the rest of the RMN fleet with new weaponry like the modern 57mm gun that replaced the original twin 102mm gun. 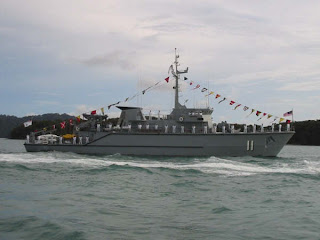 The Royal Malaysian Navy became the second Navy to purchase Lerici class Mine Counter Measure Vessel(MCMV) when on 20 February 1981 they awarded Intermarine Spa a contract for four MCMV'S, well before the completion of the first "Lerici" built for the Italian Navy. The hulls of the four ships are made of fibre glass reinforced plastics (GRP) that are able to avoid detection by the sensitive trigger equipment of modern mines. The first of this class was launched in April 1983 but they were only delivered by the end of 1985 because technical problems delayed their arrival. Due to the specific operational and technical requirements of the Royal Malaysian Navy, their configuration are completely different from the one selected by the Italian Navy, although the hull concept is the same. However, the propulsion system is based on a concept similar to that of the Italian Navy, being implemented by two separate propulsion systems. For transit and normal navigation the ship is propelled by two diesel engines driving two controllable pitch propellers, giving the ship a speed of more than 16 knots. For precise navigation over a minefield the ship is propelled by two Riva Calzoni auxiliary thrusters, each driven by an electro - hydraulic motor, and can achieve a speed of 6 knots. Three diesel generators, all of them located above the water line to minimise the magnetic signature and the underwater-irradiated noise, generate electric power. The 500-tonne vessels, each with a crew of between 48 and 65, was bought for about RM100 million each and such vessels come in handy during wartime to ensure the nation's ports and water lanes are free of mines and other submerged hazards. For defence, the vessels have a 40mm gun that serves as the main weapon. The vessels are also equipped with a Mines Disposal Vehicle (MDV) and new Olister unmanned mine countermeasure units has been purchased to replace the old units. Usually the crew would take about 20 minutes to destroy a mine after its detection. Although the vessels primary purpose is to identify and destroy mines, they are also used for offshore patrol since their size, range and weaponry is sufficient for such duties. 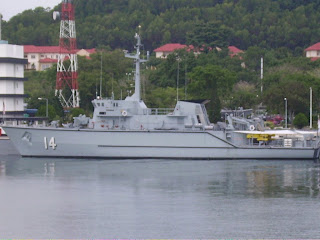