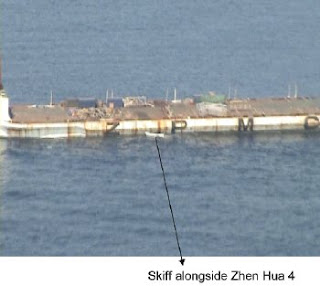 How fickle minded some of our editors can be such as the one from this newspaper whose article is featured below. They have been very silent about our navy's operations in Somalia recently but all of a sudden gave the navy's efforts in the Gulf of Aden the front-page treatment only after it transpired that our naval men stationed in the area on KD Inderasakti was instrumental in rescuing one of vessels that was being hijacked by the Somalia pirates. This after they chose not to feature any news about the return of one the Navy's ship that had operated in the area for more than 92 days, with the men missing three major festivals that they could have made a human angled story from, that was replaced by the ship that they are now toasting for their rescue efforts. At least the other newspapers were consistent in their reporting like the article published here. 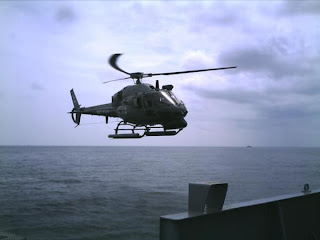 The crew on the Zhenghua 4 had earlier locked themselves on the bridge and held off the pirates, which came on two skiffs, for several hours.The Fennec gunship’s response was the first time an aircraft was deployed to engage pirates holding a merchant vessel in the Gulf of Aden. RMN Fleet Operations Commander Vice-Admiral Datuk Ahmad Kamarulzaman Ahmad Badaruddin said the Sri Inderasakti was in the right place and the right time in the pirate-menaced Gulf of Aden on Wednesday when it received a distress call from Zhenhua 4.

Pirates on the loose: Pirate boats (top) being seen near the Chinese ship ‘Zhenhua 4’ in the Gulf of Aden on Wednesday in this handout photo, while the Chinese vessel’s crew (right) prepare to attempt to repel boarders. — Reuters
“And the response from Sri Inderasakti’s response was swift,” he added.Relating the incident, Ahmad Kamarulzaman said that the RMN ship received the distress call from the Chinese ship at 8.30am (local time).“Commanding officer Kapt Mohamad Adib Abdul Samad immediately despatched the Fennec gunship. “At the same time, a request from the European Union’s CTF150 taskforce also came in for us to lend assistance and do whatever was necessary to deter the pirates because we were the nearest vessel to the Zhenhua 4,” he told The Star when contacted in Singapore. Covering 45 nautical miles at 80 knots per hour, the Fennec piloted by Leftenan Muliadi Mohd Noor and air quartermaster Petty Officer Haniffaa Haironi reached Zhenhua 4 in less than 15 minutes.
“After quickly assessing the situation, Haniffaa fired several warning shots across the bow of the Zhenhua 4. This created panic among the pirates,” he said.One of the pirates’ skiffs also sank in the battle but not from the Fennec’s gunfire, said Ahmad Kamarulzaman.
Not long after, Dutch warship HDMS Absalon of the European Union’s CTF150 taskforce arrived to escort the Zhenhua 4 to its destination.Ahmad Kamarulzaman said that the RMN is sure that there were other pirate vessels in the area as the gunship crew saw what they believed to be the “mother ship.”.
The Inderasakti had taken over from the KD Mahawangsa on Dec 12 in the ongoing Ops Fajar to safeguard Malaysian merchant vessels plying the dangerous Gulf of Aden.