Only Useful When There Is An Emergency Eh?

KD Lekiu
Well after two of our national shipping company MISC's vessels have been hijacked by Somalian Pirates in the Gulf of Aden, we are now looking with interest at the dispatch of three naval vessels sailing with members of our special forces from all three armed branches to the area. Even though our armed forces have had numerous out of area experiences far away from home, this time should be the first time we are going with a presumably aggressive mandate as previously we usually go as part of the peacekeeping forces in the area of operations but this time these units are being sent officially to monitor and safeguard our shipping vessels in the area from further pirate attacks, although this action did not save our second vessel from being hijacked ten days later. Please take note of this fact, as this amply demonstrate the need of speed for military operations, subsequently reflecting of the need for availability in the first place. Unfortunately the military only works in the background during times of peace and only comes to the fore during times of emergency, and as such there have been calls for their abolishment or reduction in their upkeeping expenses as they are deemed as a waste to the national expenditure with the given excuse that we have no 'enemy' to defend against. Therefore to maintain a standing security force is deemed as suffering from an unjustified national paranoia against bogeymen. Unfortunately as someone with a knowledge of the military would know, the enemy comes in many forms and they can appear anytime and from anywhere, and this time this fact has bitten us in the arse at a time when we are ourselves in a state of flux nationally. 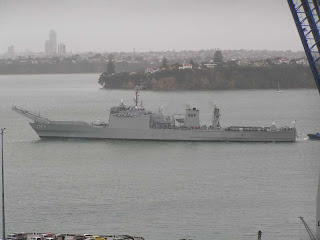 So what price should we put to the lives of 65 Malaysian crewman held by the pirates, not counting the other nationalities working on board. Anyway there are voices who say that since MISC is owned by our national oil company and the seamen are insured for such an hostage-taking situation, we should pay off the criminals in order to resolve the crisis peacefully. Yet what would then happen after this? By paying a ransom, wouldn't this put a red flag on our vessels plying these waters in the future as attractive targets since we had submitted before to such ransom demands, and to divert these vessels to a different longer route around the Horn of Africa in their commercial sailings would make no economic sense. Is it not the first rule of handling a hostage taking or kidnapping situation not to give in to any ransom demands as this would encourage more such incidents. Anyway history there has shown that these Somalian pirates has graduated from hijacking fishing vessels to larger vessels just because of such ransom payments had been made, emboldened by cash payments in the hundreds of thousands of dollars that is an enormous take in a country teetering on the edge of famine. So should we then consider establishing a regular naval presence there, when far larger navies fear to tread, spending millions in order to safeguard the commercial interests of a few national shipping companies while other countries that may also benefit from such an act cannot or will not contribute to a coalition to patrol such dangerous waters, although they do contribute to Combined Task Force 150 supporting Operation Enduring Freedom in Iraq. Although ships from the task force has periodically been peeled out to battle the pirates, such an approach even using sophisticated warships illustrates the problem that such an operation entails, the real trick of spotting the pirates before they strike as the buccaneers hide themselves in the waters crowded with fishing boats and cargo dhows that provide easy cover. And once they strike and manage to make it back into Somali waters, they are generally scot free unless the nations of the military units have the means and stomach to pursue the bandits into their wild and lawless country where some have already gotten a bloody nose. This despite the creation of a UN-mandated Maritime Security Patrol Area(MSPA) that gives the task force the authority to pursue the pirates into Somali waters. Only the French have successfully carried out such an operation to free their nationals' yatch hijacked by the Somalian pirates, while others are almost never targeted despite their locations are generally known. 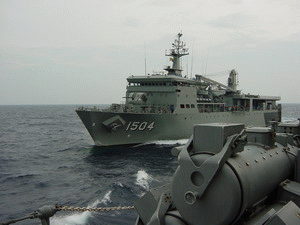 Thus are we able to answer the simple question "We know where they are, why don't we go get them?" The problem is that you need to have the law, firepower and willingness to risk collateral damage in order to do this. The legal niceties we may get as we are in contact with the recognised Somalian government to conduct a rescue mission, and if necessary we can go in under the auspices of the MSPA. Furthermore the willingness of Malaysians to risk collateral damage may strenghtened after more time has passed especially if another of our vessel is hijacked, but the firepower we have may be found lacking. We have sent one of our most modern frigate KD Lekiu into the area but since she is escorting the LST KD Sri Inderapura, the speed of our response has been delayed as KD Lekiu cannot travel at her top speed of 30+ knots, but to sail at the LST's speed of 20 knots. Thus they have only reached the Maldives to date, while the third ship to sail to follow the earlier vessels is reliably learnt to be the KD Mahawangsa, another logistics ship that sails at a slower still of 16 knots instead of the OPV KD Pahang as earlier announced. Presumably they will carry enough helicopters to fill their four helicopter spots, and these could be a mix of Super Lynxes, Nuris and Army LOHs that have been used in such rescue mission exercises before. The sending of logistic ships instead of combatants seems to indicate that rather than conducting escort missions during their presence as announced, an amphibious operation is in the works in order to operate in a hostile land. Well Godspeed in your endeavours and may all safely return home in time for the Eid-ul-Fitri. Nonetheless this operation would surely highlight our assets shortcomings as these vessels seems to be the few units that we can spare from our in-area operations, and if it fails I can guarantee there will be hysterics asking why are we not well-equipped for such an operation, and I bet a few will be those voices will be those who has said before that such readiness are a national waste. So will this then confirm that our military assets are only useful when there is an emergency. Or shall we learn that a standing armed forces is the only way we can secure our security, here or elsewhere.
Posted by mumuchi at 9:09 PM