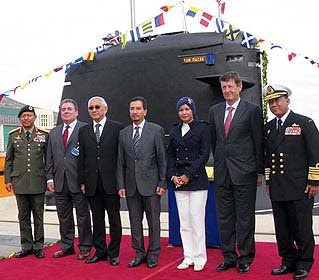 YANG di-Pertuan Agong, Tuanku Mizan Zainal Abidin and Raja Permaisuri Agong, Tuanku Nur Zahirah
posing in front of the Scorpene II name as 'Tun Razak', at the official launching and naming at Navantia Shipyard at Cartagena, Spain.
Malaysia's second Scorpene Submarine has been launched by the Queen on the 8th October 2008 in Navantia Shipyards in Cartagena Spain. The name was chosen in honour of Malaysia's second prime minister, Tun Abdul Razak Hussien, a statesman remembered for his great contributions to the country's independence, modernisation, administration and development. 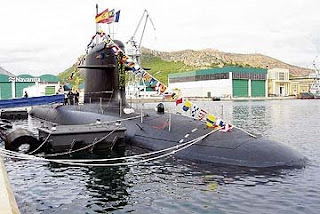 Malaysia's first submarine, named "Tunku Abdul Rahman", after Malaysia's first prime minister, Tunku Abdul Rahman Putra Al Haj, was launched at the DCNS shipyard in Cherbourg, France, in October last year.It is expected to be commissioned in January 2009, assume the name "KD Tunku Abdul Rahman" and travel back to Malaysia in May, arriving by late July 2009.The vessel launched today will be known as "KD Tun Razak" once it is commissioned in October 2009. It is expected to set sail for Malaysia in January 2010, arriving home two months later. 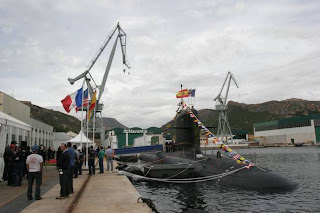 In a statement, the RMN said the first Scorpene submarine had completed combat system tests and validation of submarine performance tests in France."The submarine is currently undergoing sea trials involving RMN's Submarine Force trainees. It is expected to be in Malaysia by the middle of next year, adding sparkle to RMN's Diamond Jubilee celebration," the statement said. It is also said that she will also be displayed at the LIMA 2009 Maritime show. Malaysia's two submarines are expected to be based at the soon-to-be-completed RM690 million naval base in Sepanggar Bay, Sabah.A total of 142 RMN personnel are currently undergoing training in Brest, France, to prepare them for Scorpene duties.

Below is a video clip commemerating the event taken from Buletin Utama TV3.